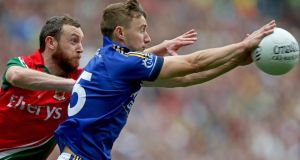 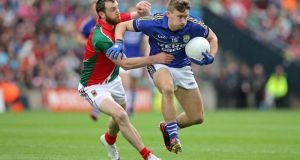 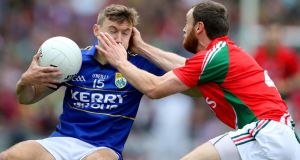 There’s a great story told in Michael Foley’s book “Kings of September” about the moment in the week before the 1982 All-Ireland football final that Offaly manager Eugene McGee heard Denis Ogie Moran was going to start for Kerry at wing-forward, rather than centre-forward.

Kerry had lost two championship games in the eight years under Mick O’Dwyer up until that point – and in both of those games Moran had been played at wing forward. He was a lucky omen at number 11 (he’d end up winning eight All-Ireland medals there, so you can’t argue with the logic), and McGee felt he had the answer to everything . . . except Ogie leading the Kerry attack.

When he heard the Kerry team announced on the radio as he drove home from training on the Wednesday night before the final, Foley writes – “McGee’s emotions came tumbling out. He roared and cheered. He banged the steering wheel. He stopped his car and leapt out. He punched the air with delight and relief. Ogie was on the wing. He could feel the Sam Maguire tickling the edges of his fingers.”

The team named was the team that was going to start, and in those exact positions – pretty simple, wasn’t it? Back then, if you were playing with a lad who wasn’t entirely sure of his left and right, you could just tell him that the combined total of your jersey number and your marker’s jersey number should add up to 17. Number five picked up number 12. Simple – although why you’d think a man who didn’t know which foot he kicked with would be capable of simple arithmetic is perhaps an argument for another day.

It was 15 battles, each to be fought on their own separate piece of territory. It was simplistic, and it didn’t do a whole lot for the team with inferior players, but it was gladiatorial in its way – win nine of those battles, and you were probably going to win the game.

And that’s why the James O’Donoghue/Keith Higgins match-up in Croker last Sunday had the potential to be such a throw-back; the country’s in-form inside-forward, against the best man-marker in the business. Would the game let us see a winner?

As it turned out, Higgins had too much help too often in the game to make it a straight shoot-out, and both men had so many good moments that it felt like a score-draw

Higgins was the high-wire act, the man who knew he was one mistake from a calamity. O’Donoghue was paid the ultimate compliment by Mayo, with a rotating support cast for Higgins which at times numbered their entire half-forward line.

That supporting cast nearly proved Mayo’s undoing of course, O’Donoghue’s second point coming courtesy of a dropped catch by Colm Boyle on the Mayo 45-yard line. Luckily for Higgins, and for him (and unbelievably for the rest of us) O’Donoghue blasted over when one on one with the keeper.

Higgins stood him up masterfully time and again, forcing him to turn back and to pass behind him, but O’Donoghue finished up with 1-3 (twice what Cillian O’Connor managed from play), and the ball in his hands deep into injury time with the winning of the game in his grasp. The fact that he pulled his shot ever so slightly and hit the post had nothing to do with Higgins, for all the Mayo man’s great work prior to that.

The clamour since the game finished has been for Mayo to dispense with that spirit of containment which seemed to inhibit their play in the first half, in its own way a testament to the job people still believe Higgins can do on O’Donoghue. For Mayo not to tear into the game with the physicality and energy we’ve seen from them over the last four years is like Joe Frazier not throwing a left hook, for fear of getting hit on the counter. At some stage you’ve got to bank on your best shot being better than the other guy’s best shot.

In my dream scenario, Higgins is offended by the idea that he needs help in the first place. Maybe he’ll spend this week pleading with James Horan to let him handle O’Donoghue the old-fashioned way. Stare into his eyes, step on his toes during the anthem and tell him how long a day he’s going to have.

It’s never as easy as that anymore, and going into the other semi-final this Sunday, it’s not a question of which Dublin defender will pick up Colm McFadden, it’s how many of them. Like McFadden and Bernard Brogan in the 2011 All-Ireland semi-final, genius finds a way to impact the game. O’Donoghue finished last Sunday with 22 possessions, and the Kerry game-plan will revolve around him again. Mayo’s gameplan did too last week, and it almost cost them . . . something tells me it’ll be different this Saturday.

1 Gerry Thornley: Talk of Anglo-French hegemony is over the top
2 What next for green jersey hero Sam Bennett after the toughest of Tours?
3 The Offload: Saracens prove Pro14 is not fit for purpose
4 Chris Wilder confused by John Egan’s red card at Villa Park
5 Born to ride, born to win: Sam Bennett, the making of a green machine
Real news has value SUBSCRIBE