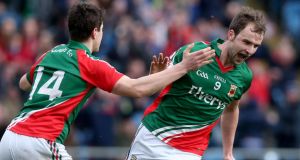 Division One A leaders Cork fell for the first time in this year’s league when convincingly beaten by Mayo before about 8,000 spectators in Castlebar yesterday. The county town has other things on its mind today, as Mitchels go in search of the All-Ireland club title, but for the home side it’s been a reassuring couple of weeks after a difficult opening to the campaign.

It was a most peculiar match. If you stripped out roughly the first and last 10-minute periods, the visitors outscored their hosts by 1-8 to nil but the middle 50 minutes were a rout.

Few would have seen that state of affairs emerging, as led by full forward Brian Hurley whose three points from play between the third and sixth minutes formed the centrepiece of an unanswered five from Cork in the initial stages.

Mayo manager James Horan has seen enough fires breaking out early in matches on the edge of the square to know it’s best not to delay the response and he switched Brendan Harrison off the Castlehaven forward, whom he then entrusted to Ger Cafferkey.

As emphatically as someone turning off a tap, Cork’s flow just dried up and Mayo assembled a six-point response without interruption.

Goal chances
As usual Mayo created an impressive number of goal chances, forcing saves and kicking wides. Not alone did they start to monopolise the kick-outs in but nearly every ball into the forwards found a man.

Alan Freeman was causing all sorts of bother under such deliveries at full forward but might have done better than force a block from Michael Shields in the second minute when clear on goal.

“We created 10 goal chances today,” said Horan afterwards, “scored four and for 35, maybe 40, minutes played some really, really good football so I’m delighted with that but the goals we gave away were really sloppy.

“We were five points down and our midfield just took over the game, controlled it and dictated the momentum of the game for the next 40 minutes. We ran the bench a little bit and got a little bit ragged but that’s okay, we need guys to get game time. We got two points playing Cork and I’m happy with that.”

Mayo helped themselves to nine successive restarts when turning around the match. Colm O’Neill levelled the match at 0-6 each with a 45 but another Freeman attack saw the ball go to Jason Doherty who forced Ken O’Halloran to deflect it over the bar for a lead that Mayo never relinquished.

Doherty did better in injury-time, going through the middle and shooting the first goal for an interval lead of 1-9 to 0-6.

Aidan Walsh got a grip on the match in the third quarter and delivered some sort of foothold at centrefield for Cork but Mayo’s sharpness on the ball with Donal Vaughan and Lee Keegan in full flight from the half backs and Kevin McLaughlin’s accuracy from play meant that the visitors made no inroads on the scoreboard.

For most of the final half hour Mayo managed just three scores but they were all goals: Freeman taking one for himself, Jason Gibbons rampaging in for the third and McLaughlin having weaved into a promising position, choosing to put it on a plate for Cillian O’Connor whose support runs and instinct have made a staple diet from such morsels.

Everything else was an afterthought. Cork threw on replacements – enforced in the case of the black card for Fintan Goold’s hauling down Colm Boyle – and were rewarded for persistence with goals firstly for replacement John O’Rourke in the 57th minute and then Hurley.

‘Good position’
“We’ve plenty to do,” was the reaction of Cork selector Ronan McCarthy, “but we’re still top of the league in a very good position to qualify. That’s our goal set out at the start of the year and that’s still within our reach.

“We need to also to work on our breaking ball out the middle of the field as well as the ball into the full-back line. We probably need to sweep better under high ball. Seven goals in two games and more chances on top of that so certainly it’s a worry.”

Horan said that Mayo forward Cathal Carolan, who last week joined the daunting numbers of cruciate victims was “already on the path to recovery”.

He added that the chances to goals ratio wasn’t a concern.

“Not all. I’d be far more concerned if we weren’t creating them. My big concern is the amount of goals we’re giving away so that’s something we need to keep chipping away at.”