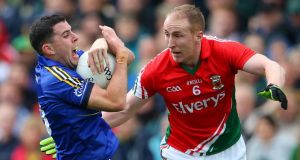 In considering his county’s prospects days prior to that thrilling draw against Kerry, Liam McHale hit upon an aspect of Mayo’s play that has been given scant analysis.

“What I am talking about is when you are 0-7 up with 10 to go that you should make adjustments to make sure you’re not going to be . . . you have to adjust your game plan a little bit to make sure that you are defensively sound,” he told a Newstalk gathering in Westport. “All we had to do against Cork was not give away goals and we would have won that game easily.”

The observation was prescient. In the afterglow of Sunday’s draw, there were so many aspects to the game that one of the most basic was half forgotten. There was a huge element of heroism to the performances of both teams.

Kerry’s refusal to quit when faced with an avalanche of Mayo will and scoring power can’t be underplayed. And Mayo’s great response when their 14-man side somehow turned logic and a 0-11 to 0-6 deficit on its head catapulted them into the ranks of special teams regardless of whether they complete their quest for an All-Ireland title or not.

But, for the second game running, they managed to allow a situation of which they appeared to have firm control to almost run away from them. Two late goals from Cork turned that quarter-final into a nerve-wracking affair.

If the Killarney man had directed his late shot-to-win-it opportunity just a few inches to the left, Mayo would have discovered that losing All-Ireland semi-finals can hurt ferociously too. To have produced that comeback with such a steady, mounting display of integrity, strength, skill and teamwork only to have it all dissolve in the last three minutes would have been incredibly sickening.

When Cillian O’Connor clipped a point to place Mayo 1-14 to 0-13 ahead, they seemed set to power home. Instead, they were faced with the grim prospect of watching Bryan Sheehan, one of the most lethal place kickers in the game, line up with the last kick of the game knowing that a score would have extinguished their All-Ireland hopes for yet another year.

The extreme contrast between Mayo’s first- and second -half approach leaves them with a fascinating choice. How should they approach the replay? Faced with the starkest terms at half time, trailing by 0-9 to 0-5 and without Lee Keegan, the most explosive attacking talent of their defensive unit, they had no choice but to go at Kerry with abandon.

The result was so compelling that for a while it looked as if they had inadvertently stumbled on the key to winning the championship.

Without question, Mayo fell into a 20-minute spell of poor decision making and collectively seemed caught between two minds as to what they wanted to do. If the dismissal of Keegan was the voltage they needed to end their indecision, then they used it to spectacular effect.

Or do they approach the replay with the same degree of caution? And if they build a significant lead in the second half, do they then look to close ranks and see the game out in defensive fashion?

Speaking immediately after the drawn match on Radio Kerry, former Mayo forward Kevin McStay had an interesting perspective on what James Horan side might have learned.

“This is a different Mayo team. They have plenty of edge and they were physical. From a Kerry point of view, they have to figure out Declan O’Sullivan and Bryan Sheehan. Declan is obviously struggling with his knees because if he wasn’t he would have started as he is such a star player. And other players just misfired.

“There is a huge amount of analysis going to go on, rest and recovery and then you start the whole ball game again with new match-ups. The cat is out of the bag in terms of Donaghy and Mayo will have learned an awful lot about O’Donoghue.

But for all that, Kerry regrouped this week in Killarney relieved to still be in the All-Ireland championship. They named the same team and will play the same game in Limerick today. Feelings must be more complex in Mayo.

Keegan’s reprieve restores an invaluable player to the team and leaves them back at square one. Their big decision is whether they again try to be methodical and sensible or simply let the wild horses gallop and see what happens.

All eyes are on them.