Mayo get off to quick start in New York 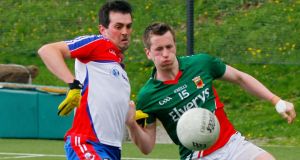 The sun came out for the two teams at Gaelic Park in the Bronx as New York took on a Mayo team who were considered heavy favourites. It didn’t take long for Mayo to convert the first score, when after 30 seconds Donal Vaughan kicked over after a sweeping run.

Gavin Joyce was then forced into making a good save from Andy Moran’s attempt but Kevin McLoughlin fisted over the rebound. Mayo never looked troubled in the first half, winning a majority of the ball around midfield before getting the ball into a revolving full forward line who scored seven of their 10 first-half points.

Jason Kelly went down under a heavy challenge which forced a stop in the play after he collided with the Mayo half-back. New York hit the post three times before the break and were unable to convert from free kicks.

A major talking point of the first half was a challenge by Ronan McGinley, who was lucky not to be sent off after hitting Kevin McLoughlin high and receiving a yellow card. The Mayo corner forward had to be carried off the field visibly shaken by the challenge.

Well-worked move
Mayo came out with the same force that they started the game only this time a well-worked move was converted into a goal by Diarmuid O’Connor. There was a hint of a comeback from New York after the goal as they scored three or four points on the bounce before a lack of discipline gave away not one but two penalties.

Man-of-the-match O’Connor converted ruthlessly from set pieces and was a key figure in an impressive full-forward line. Two excellent scores from Gary O’Driscoll and a well-taken free from Jason Kelly clawed back some respect for the home side.

Mayo however inflicted more punishment just before the final whistle when an exceptional ball from Lee Keegan found Varley before he rounded the goalkeeper and tapped into an empty net.

New York boss Ian Galvin lamented the fact his side had a limited amount of competitive games to play before they took on Mayo; however he insisted he was pleased with his team’s performance.

“I don’t think the score line reflected on the effort we put in,” he said. “Going out after half-time we spoke about keeping the game tight and we were disappointed they came out and got the goal. We’re playing teams who come off league campaigns and the only thing we can do is get the boys to mark each other week in week out.”