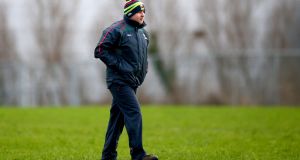 Mayo brushed aside IT Sligo to make it two wins from two for new boss Stephen Rochford. Photograph: Inpho

Mayo made it two from two by following up their first round win over NUIG to outclass IT Sligo at James Stephen’s Park, Ballina on Sunday and set up a top of the group meeting with Roscommon next Sunday.

New manager Stephen Rochford stuck by a few players he had picked for the opening round and his faith was rewarded in attack with all six forwards hitting the target, while newcomers Darren McHale, Andrew Farrell and Keith Ruttledge impressed as did Mark Ronaldson, who finished the game with four points from play.

The Sligo students worked hard, none more so than Adam Traynor, who was their biggest threat up front, but they lacked the class and experience for Mayo who had a handful of experienced players in from the start and also brought in Donal Vaughan, Colm Boyle and Tom Parsons to good effect, the latter operating on the edge of the square

While satisfied with the win Rochford said he was more concerned about the performance.

“It is nice to win these games but I’m more interested in how players perform and we did put a few things into practice which we had worked on in the training ground. That is good but against Roscommon we will have to move up a few more rungs on the ladder. These are early days yet and we are happy with the way things are going,” he said.

Mayo led by 0-7 to 0-3 at the break and the goal they had been threatening to score finally came fifteen minutes from time when Kevin McLoughlin steered a stray pass into the bottom corner of the net to establish a 1-14 to 0-7 lead.

Mayo created a number of goal chances with McLoughlin, Parsons and Ruttledge blazing over the bar with goals at their mercy but the fact that all but two of their scores came from play has to be an encouraging start for the new management team.

Roscommon joint-manager Fergal O’Donnall praised his side’s workrate as his side edged out NUI Galway by four points in Elphin.

He said: “We really worked hard but we coughed up possession too. We had to work hard to win it back but then we gave it away as quick. That was the disappointing thing. You’d be congratulating someone for turning it over but then it would be gone again. Technically, we were poor but the workrate was very high.”

Roscommon led by 0-6 to 0-2 at the break thanks to a solid work ethic all over the park. Points from Niall Kilroy and Cian Connolly opened up a two-point lead before Peter Cooke registered his side’s first score in the 17th minute.

Further Roscommon points followed from Murtagh and Cian Connolly (frees), while Conor Devaney landed one of the points of the afternoon from distance. A free from Cooke provided some respite for the visitors but there was still time for Connolly to grab his second free to give the Rossies a 0-6 to 0-2 interval lead.

However, Roscommon always managed to keep their noses in front. Kilroy, Ronan Daly and Murtagh (a free) found the range before substitute Senan Kilbride and Murtagh sealed the deal in the final three minutes.

Joseph Donnellan set superb GMIT up for a well merited one point win over a disappointing Sligo with a goal less than thirty seconds into the second half of this FBD division 2 football game at Connolly Park, Collooney.

The Cortoon Shamrocks corner forward caught the home defence completely off guard as he blasted the ball past Aiden Devaney to give the visitors a 1-6 to 0-6 lead.

The sides finished the first half level at six points a piece.

Joe Rodgers missed an easy goal chance for the Yeatsmen two minutes into the first half before Andy Glennon opened the visitors account with a pointed free.

GMIT kept well in touch with the hosts in the first half, displaying solid defensive play and superb ball skills.

The Yeatsmen came more into the game as the second half progressed scoring three unanswered points but fell short of at least forcing a draw in what was a disappointing outing for manager Niall Carew.

Carew said there was a “ lack of desire and energy” particularly in the first half and this would have to be put right with the NFL coming up.

Galway needed a goal 12 minutes from time by substitute Danny Cummins to force their second win of the campaign at Tuam Stadium.

Three points in a row from Leitrim to start the second half had given them a two-point lead, but after his introduction, Cummins punched a point and then fired the winning goal for his side.

An excellent goal from newcomer Nevin O’Donnell meant Leitrim kept in touch at half-time and only trailed by 0-6 to 1-2, as three frees from Eddie Hoare gave Galway the advantage.

With the light breeze at their backs Leitrim started the second-half brightly as Emlyn Mulligan and Shane Quinn both kicked points following great moves.

Adrian Croal gave his side a 1-5 to 0-6 lead in the 40th minute, but after the home side fluffed a couple of goal chances, Cummins clinched the win when he fired to the net from close range.