Maurice Fitzgerald is a reluctant interviewee, but Darragh Ó Sé draws foul and fair from him 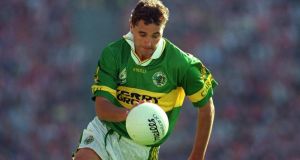 “All it is is that we love the game and we were lucky to play it,” says Maurice Fitzgerald. “There isn’t any bit of a story beyond that much really.”

So that’s that, then. Call the picture desk and order up a huge photo. Crank the headline up to the font size they used for the moon landings. See if the well-dressed lads on the selling floor can hustle an ad out of somewhere. Anything to fill the page where the big Maurice Fitz All-Ireland final interview was supposed to go.

Thing is, we came to Waterville and it’s a long way home. So we may as well fulfil the fixture anyway. And we brought company too, in the shape of Darragh Ó Sé. For a couple of years now, Darragh has been in our ear on and off saying that the whole world has been missing a trick when it comes to the great man. “You should interview Fitzy, he’ll surprise you.”

“The thing you must know is that he had his own routine when it came to big games,” says Darragh, taking plenty of delight in the discomfort he’s about to rain down. “Sure he wouldn’t come up at all to us on the Tuesday night before a semi-final or a final. He needed a bit of Maurice time.”

“Ah look,” says Maurice Fitz, taking the bait. “I don’t know if it was that. These lads would be getting very excited above in Killarney and if I went up I’d be listening to this kip o’ the reel from all of them and it would tire me out. I couldn’t be listening to all this joking around. I needed a bit of time out. So I used to go for a few cones with Kieran [McCarthy, friend and training partner] down in Cahirsiveen.”

“Páidí­ would be tearing his hair out, wondering would he turn up for the game at all,” stirs Ó Sé.

“Maybe I did do it a few times but I would probably have been practising a few frees down below. The idea of going up and down for two hours didn’t really appeal to me and in fairness, a lot of it would have been chit-chat and talking and I felt I wanted to hone down on getting my kicking right and things like that. I was probably doing a bit of fine-tuning. Or else I was gone for a 99 . . .”

So this is Maurice Fitz. In Kerry, they talk about their heroes in a spectrum of flavours. The Golden Years team don’t need anyone’s earnest praise, they just hang in the background like a Caravaggio. Colm Cooper is spoken about with pure love, the Ó Sés with you-couldn’t-be-up-to-them affection. But for Fitzgerald, there is real reverence.

Some of it is down to him never having gone looking for it. He is almost aggressively modest. Despite the evidence of our eyes, he won’t concede that his talent was exceptional. “I was only a drop of water in the shower,” he says at one point.

“I couldn’t honestly say that I felt any more pressure than the rest of the panel. I don’t know that I had much additional public attention really. The beauty of the game is that even if somebody tries to single you out and say you’re something different, you know that it’s a team game and always will be.”

But mostly it’s down him having been that flare in the darkness when Kerry needed saving. The bare numbers of his career give you sense of it. His 12-205 make him Kerry’s third highest championship scorer behind Colm Cooper and Mikey Sheehy, with the second highest average points per game (5.4) behind Sheehy (a ridiculous 6).

He won’t be caught anytime soon, either – of currently active players, clubmate Bryan Sheehan is 68 points back the road, James O’Donoghue 169. This, remember, is despite not playing in an All-Ireland final until his 10th season. For all the slagging O’Donoghue took last year about being an All Star winner with no All-Ireland medal, Fitzgerald is the only Kerryman in history to win two All Stars before his first All-Ireland.

“There were periods of my life where I was completely obsessed with it, there’s no point saying otherwise. You strive for excellence. You want to be the best and to be the best, you have to work harder than everybody else.

“You go into a Kerry jersey at a young age and you think it’s going to be All-Ireland finals every year. We lost an All-Ireland semi-final to Down in 1991 and I had this feeling that we’d be back the next year. But a few years flew by and we hadn’t done anything. It was only when Darragh and co came into it that I became completely obsessed with.

“I felt that that the time was running out. I was going into my 10th year playing with Kerry and if you’re not going to be obsessed at that stage, it’s soon going to be time to vacate the premises. The pressure was on and we needed to deliver. We needed to get there.

“You showed it plenty!” pipes up Ó Sé. “I played against you in a county semi-final and I ended up with four stitches in the back of my head.”

“Yeah,” smiles Fitzgerald. “Well, that was an accident. There were a lot of accidents. I’ll put it to you this way – I was never caught.”

“Sure it wouldn’t have mattered,” hoots Ó Sé. “Who was going to give Maurice Fitz a red card?”

“I played it out the way it needed to be played out,” he says, in all seriousness. “I had a preference for doing things and doing them right. But you do take an awful lot of stick as the years go by. I went out to play the game and play the ball and I always wanted to maximise what I could do on the ball. That to me was the most important aspect of the game. But I would never be found wanting in any other aspect of the game. I did not like to lose.”

By 1997, he’d lost his fill. Munster finals, mostly to Cork but also, embarrassingly, to Clare. All-Ireland semi-finals to Down and Mayo. Finally making it to the big show that year made him giddy almost. Steeled and coiled and ready for action obviously but mostly – and you don’t often hear champions say this – mostly happy to be there.

“Why do we play the game? What do we grow up dreaming of? We do it for this day and here all of a sudden it was coming down the tracks towards me. The moment was arriving and I think it was just that knowledge that your moment was arriving, that you hadn’t missed the boat once again.

“I was so happy. It wasn’t a matter of pressure, it was a matter of being very, very happy and privileged to get an opportunity to play in a final. I remember that was my overall sense. I knew I had a lot of work done, I knew I had a good game within me.

“This is not saying that you’d be arrogant or cocky, none of those kind of feelings. It was just a great sense of joy and relief and excitement at the possibilities. Why would you feel anything else? You’re an athlete and you’ve worked so hard for this thing. There’s no point going in there with any other sort of emotion or feeling.”

“We did a drill one night in training where Eamonn Fitzmaurice was marking him. The idea was that you’d draw the defender and lay off the pass. Maurice had drawn wide and I was running through but I got it into my head that I was as good a man to kick a point as any so I went to go around Fitzmaurice. Sure he emptied me altogether. The only thing harder than him hitting me was me hitting the ground, which was rock hard in the middle of the summer.”

“You were hurting, I remember it,” grins Fitzgerald. “You let a big groan out of you.”

“Next thing,” continues Darragh, “your man here comes strolling out past me and me lying crippled on the ground. He takes one look at me and he just shrugs. ‘Should’ve passed it,’ he said, and walked off. No sympathy whatsoever.”

“No sympathy, no. You passed it the next time though.”

In time, he moved on. His end was messy but mention of it brings the shutters down. He kept playing for St Marys (still does, turning out for the Bs at the age of 45 when he’s not training the seniors) and dug out a glorious coda to his intercounty career by winning three county championships with South Kerry, the first of them a full 18 years after he’d made his debut. Some way to top it all off, you suggest.

“Well, there was no topping off,” he replies. “If you asked me tomorrow to go out there and play for South Kerry, I’d be out in a half-second. The bug is there, it didn’t go away. I haven’t been cured of the disease. I still love to be out with the lads, kicking around at training. That helps.”

Do they still go over the black spot?

“The only thing, you didn’t ask me how far out I’m kicking from.”