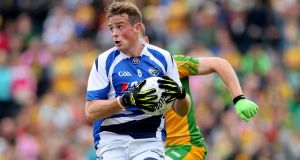 Laois’ Kieran Lillis will play no further part in their Allianz League campaign.

Laois have been dealt a blow in their Division Two relegation scrap with confirmation that midfielder Kieran Lillis has broken his foot.

The Portlaoise clubman was stretchered off after only six minutes of his team’s dramatic draw with Derry at O’Moore Park on Sunday. After a long stoppage in play Lillis was carried from the field and taken to Tullamore hospital where the fracture was confirmed but no surgery was necessary.

During an accidental collision Lillis went over on his foot awkwardly, and while he will certainly be ruled out for the remainder of the league Laois are not yet ruling him out for the entirety of the season.

Laois manager Mick Lillis, Kieran’s father, had only welcomed the likes of Colm Begley, Conor Meredith and Brendan Quigley back into the fold in recent weeks - and with a trip to an in-form Cavan team, and the visit of Meath to come the hard working midfielder will no doubt prove a major loss.

Laois are currently joint on three points at the bottom of the division with Meath and Armagh, a point behind Fermanagh.