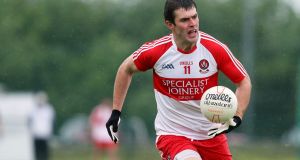 This was an incredible game of football and after all the hard work and great scoring feats perhaps a draw was a fair result - although a point apiece is hardly any advantage to either manager.

Laois were seeking only their second win of the campaign and Derry were hoping for a response after a heavy defeat to Tyrone last weekend.

The home side got a dream start when indecision in the visitor’s defence was punished by Paul Kingston who raised an early green flag. Paul Cahillane added a point almost immediately before Ryan Bell opened the Derry account from a close-in free.

Laois lost Kieran Lillis with a serious foot injury but were four points clear entering the second quarter when defender Daniel Heavron kicked the first of Derry’s goals. This didn’t stir Laois though as they quickly went five clear after great points by John O’Loughlin - before Derry were awarded a penalty which Shane Heavron converted and at the break Laois led 1-10 to 2-6.

The second half produced some amazing scores and drama, Laois had gone three points ahead when Derry centre forward Chris Bradley goaled for the visitor’s third. Laois responded with a succession of points to lead by four after two massive points by Darren Strong. But Dery came again and Bradley hammered home his second goal to put just one in it.

Laois never panicked though, they quickly rebuilt a three point lead with three minutes remaining but Derry substitute Mark Lynch finished a great Derry move to equalise with his team’s fifth goal. Their joy was shortlived, Conor Meredith reclaimed the lead after 72 minutes - but Derry’s fighting spirit was eventually rewarded as another substitute, James Kielt levelled matters for the last time.