Kingdom’s more potent attack can point the way to victory 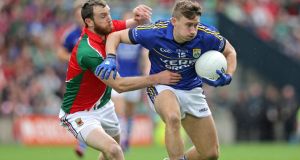 Venues don’t actually matter a toss in championship football, and once that ball is thrown in at the Gaelic Grounds this evening, the only thing the players will care about is winning the game.

So, as difficult as any replay is to call, why do I feel this tie is still swinging in Kerry’s favour?

They finished that bit stronger than Mayo in Croke Park last Sunday, and Eamonn Fitzmaurice will have come away knowing a bit more about where Kerry need to improve.

In fact Fitzmaurice must be still scratching his head, wondering how Kerry allowed a 10-point turnaround in a game they started so well.

Defensively, Kerry can and definitely will need to improve. They cannot let Mayo run at them as easily as they did last Sunday, particularly in the second half. Kerry’s tackling was poor at times, and they’ll want to see more tracking back from their half-forwards and midfield, which was non-existent the last day.

As a result, Kerry’s full-back line was too exposed, ended up conceding too many frees, and the same with Peter Crowley at centre back. One way of improving of that is to divert more of the Mayo attacks out wide, by whatever means, and with that reduce the threat of scoring.

Either way Kerry will need to block up those middle channels.

Kerry’s other advantage now is their options from the bench.

Anyone wondering what had happened to Kieran Donaghy got their answer last Sunday, and I think Fitzmaurice is right to keep him in reserve again. He can make a big contribution once he’s called on, and likewise Killian Young, Kieran O’Leary and Barry John Keane.

In contrast, Declan O’Sullivan and Bryan Sheehan struggled a bit, and mightn’t be introduced as quickly this time.

That’s not saying Mayo don’t have advantages of their own since last Sunday, starting with the availability of Lee Keegan. It was a hard call to clear him, because technically the referee was correct to send him off, although it’s made in the right spirit of the game, and the fact it was a harsh call at the time.

Another advantage Mayo have this time is knowing they can’t give Kerry too much respect, like they did for the opening 20 minutes last Sunday. It felt like they were feeling their way into game, and ironically only exploded once they were reduced to 14 men.

Here, they will want to attack Kerry from the start – the only risk there being the ability to sustain it.

They certainly tired towards the end the last day, but I’ve said before that I think this Mayo team are a little further down the line than Kerry in terms of conditioning.

They ran themselves into the ground last Sunday, but will have no problem recovering. They also reinforced their own self-belief, and maturity as a team, in the way they fought back in the second half.

Still, I feel Mayo have a potential weakness in their full back line, and I feel Kerry can expose that more, especially with the added Donaghy threat, and their ability to conjure up more scoring chances, even with less possession. Mayo are still a little too reliant on Cillian O’Connor for my liking. Like last Sunday, I expect it to be very close, both teams going relentlessly at each other and Kerry, even if their tradition in replays is not anything to go by, will know a little more about how to win it.

I also expect Dublin-Donegal on Sunday to be closer than some people are saying, although no matter how many times I go over the game in my head, I can’t see Dublin losing. They’re playing with absolute confidence, have blitzed all their opponents so far, are extremely well managed by Jim Gavin, and boast that extraordinary depth of talent right down along the bench.

To me, that strategy will have to be ultra-defensive, aimed at frustrating the Dublin players for as long as possible, and disrupting their free-flowing attacks.

Dublin will face some ferocious tackling, which is why the key for them is staying patient, disciplined, and composed, because such is the speed and variation of their game, it’s only a matter of time before they break through.

Indeed Dublin are a far better team than 2011, when Donegal tried similar tactics. Therefore Donegal will have to raise their own attacking game, and with Colm McFadden struggling, it is hard to see how Michael Murphy, as good as he is, can play both an attacking and defensive role that will be required of him.

I also think Donegal showed some weaknesses against Armagh, in that they’re not as composed in possession as 2012, nor are they supporting the ball-carrier as much. McGuinness is shrewd and knows only a relentless pace will match Dublin, and if they can keep the scoreboard as low as possible for as long as possible then it will be fascinating.

But ultimately Dublin’s scoring machine has to win out.