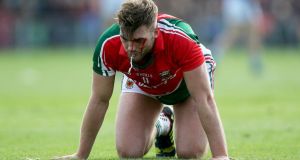 Mayo’s cause wasn’t helped when Aidan O’Shea was injured just before half-time in an accidental collision with team-mate Cillian O’Connor. Photo: Donall Farmer/Inpho

Scenes from the Gaelic Ground, Saturday August 30th: Kerry men and women of all ages, wild-eyed with delight emerging from the shadows of the Mackey Stand to acclaim the latest sons of their football fields. The Kingdom found a way. Have they celebrated any All-Ireland win as fiercely?

And sometime close to nine o’clock and James Horan standing in a makeshift kitchen somewhere under that same stand. His time with Mayo is up now but the world outside the dressing room doesn’t know it yet and like many county men before him, he is trying to explain away a gut-wrenching Mayo loss, when valour wasn’t enough.

“Very proud and very disappointed,” he says waving away the old consolations of bad luck and a few crucial whistles that went against them. “Ah yeah, yeah. I am not looking at referee’s calls. It is no good for me. It is no good for the soul.”

This All-Ireland semi-final replay will never be forgotten. Most in the crowd of 36,256 agreed that they had never seen a football match quite like it. The GAA absorbed the criticism about relocating this fixture from Croke Park to Limerick during the week. The rights and wrongs don’t change but they can argue that the occasion provided the last word.

So many moments will stay vivid. See now Kieran Donaghy cloudbusting as if the old days and getting a long leg to crash home the goal which revived Kerry’s challenge. See David Moran rise to claim mention among the great lineage of Kerry midfielders with a storming hour.

Recall the low murmur of shock when it became evident that Kerry would field an Ó Sé-less championship team for the first time in two decades: the decision not so start Marc Ó Sé seemed to break many piseogs if not actual law.

Ó Sé’s second-half point, gambolling along the sideline, was just one of many thrilling scores made in a game where they all registered like heavyweight blows.

Mayo struck with two lightning Cillian O’Connor goals in the first half to briefly take control of the day but still needed Donal Vaughan to come blasting through the Kerry cover and punch a 73rd minute score to earn extra-time.

By then, emotions were at breaking point. The players became entangled several times over the night and boxed when the day was all but done. And it took six stewards to haul an overwrought supporter from the pitch: the thought occurred that the invader may have been the only Mayo man with the muscle and heft to rope in Donaghy.

Cramp seized all players, even the mercurial James O’Donoghue. Through 80 minutes of ferocious, bloody-minded tackling and agitation, his dual with Keith Higgins seemed borrowed from the Matrix: it was all about super reflexes and footwork and clean anticipation; a game within a game. Higgins’s defence was wonderful. O’Donoghue finished with 2-6.

“Well, two penalties,” the boy-genius clarified, as if they don’t really count. “Keith is ... Keith is an excellent player. And at half time I was probably losing that battle and people were giving me advice, do this, do that. At the end of the day you just got to go out and have a cut off him again. I think we had a good tussle and it ended up even enough.”

O’Donoghue had to watch the last 10 minutes of extra time on the sideline. “I nearly passed out. But my good buddy Jonathan Lyne kicked two invaluable points and I am delighted for him . . .”

Old Kerry ice and fire saw them through the last period of added time.

“I always knew it was there but it is really pleasing to see it come out,” said Eamonn Fitzmaurice. This was one of Kerry’s most daring raids.

But when will Mayo’s day come? The eternal question remained as the convoy of heartbroken green and red inched up the N18 towards the home county. Different countryside, the same Via Dolorosa.

On Saturday, they learned that endless courage and faith wasn’t quite enough even if James Horan’s team will never be forgotten. We all learned again, that when it comes to this game, Kerry are the ultimate shape shifters.

A never-to-be-forgotten day finished on a familiar note: Mayo in mourning and Kerry, on song, as September rolls around.