Kerry get off the mark in Derry 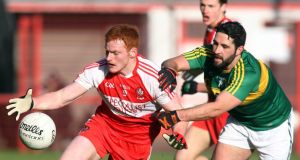 Achieving milestone results at this time of year is not really Kerry’s thing, but Éamonn Fitzmaurice was still pretty pleased to pick up his first ever National Football League win during the month of February.

Having lost his first four league games in charge in 2013, followed by the opening three games last year, he only had to wait until week two this year to get the All-Ireland champions up and running.

With less than half of his strongest 15 on show and Tommy Walsh, starting his first game since the 2009 All-Ireland final, taking another small step on the road back, there were plenty of positives for Fitzmaurice to take from Kerry’s first ever match in Celtic Park.

“It is good from the point of view we’ve Dublin coming in three weeks’ time,” he said.

“If we were beaten today, you’d just be digging a small bit, whereas after winning today everyone is in good form going down the road.

“There was a big difference from last weekend. Mayo were a good bit down the line and that game stood to us. We played UCC in a challenge on Tuesday and you could see we’ve had a good week’s work done.”

Understandably Walsh, who started at wing-forward and was moved to full-forward before being taken off early in the second half, struggled with his ball skills.

At the other end of the scale was Paul Geaney who kicked a superb 1-5 from play, all but one of that total coming in the second half, including a crisply taken goal after 61 minutes.

Kerry settled quickly with two points in the opening minute and never looked back.

The sides were level on two occasions in the first quarter, before Kerry kicked five of the seven points before half-time to lead by 0-10 to 0-7 at the interval.

Even though a straight red card for Derry captain Mark Lynch in the 51st minute looked a harsh call, the visitors were already leading by four points and coasted home.

Bryan Sheehan’s stunning accuracy from placed balls contributed 0-7 of their total while the good news kept coming for Kerry with Killian Young, Donnchadh Walsh and Anthony Maher all coming off the bench for their first appearances of the year.

Derry lacked penetration in their full-forward line and relied on long-range scores in the first half from Daniel Heavron. Ciarán McFaul and half-backs Gerard O’Kane and Kevin Johnston to keep them in touch.

Eoin Bradley was introduced for the start of the second half to add a physical presence up front and he converted four frees, but every time Derry got close on the scoreboard, Kerry pulled away again.

Initially Derry rallied after Lynch’s dismissal, scoring the next two points, but Kerry outscored them by 1-4 to 0-2 in the closing 14 minutes with Geaney’s goal sealing it.

Derry full-back Niall Holly’s ball across the square was intercepted by Stephen O’Brien and it was eventually recycled to Geaney, who curled the ball low beyond the Ulster side’s goalkeeper Thomas Mallon for a cool finish after 61 minutes to complete a good day’s work for the reigning All-Ireland champions.