Fans celebrate after Dublin's 1-15 to 1-14 win over Mayo in the All-Ireland SFC replay at Croke Park on Saturday, October 1st. Video: Andy Cowan 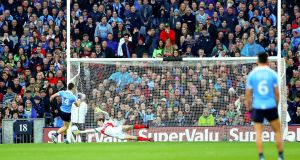 Behold the Invincibles. The Rising centenary has been marked by the city football team. Dublin started and finished the year as All-Ireland football champions and did not lose a single match in league or championship. What a game.

The 2016 championship, that big, sprawling beast of a tournament came down to single heart-stopping moment and on its closing sound – a sustained note of Dublin ecstasy – it served out measures of heaven and heartbreak in its usual impartial way. To the victor – to Dublin: everything. To Mayo: an ocean of tears.

It finished 1-15 to 1-14: just a single kick divided these extraordinarily deep teams but by the final whistle the counties might as well have existed in different solar systems.

Just like the draw, this match was a trip into the elsewhere. An 85-minute encounter full of wildness, packed with mistakes and strange moments and ending with the endlessly cruel sight of Cillian O’Connor, Mayo’s captain and the man who brought the teams back here, curling a difficult free just short of the post on the Hill 16 end of the stadium.

Did Mayo deserve a draw and an extended shot for glory through extra time? Possibly. But would that added period merely have prolonged the ultimate agony? Probably. Yet again, Mayo could not kick and think their way into the open country of a lead in this second half and were constantly chasing scores, chasing Dublin runners and, at last, chasing ghosts in those last unbearable moments. Because Dublin just kept on coming, from minute one until minute last. They didn’t yield and they knew they had more answers, more options: more scorers.

“What is pleasing about this result is that they went at it,” reflected Jim Gavin after the Sam Maguire had been raised and the city went into Saturday night fever mode.

“They drove harder at Mayo and met a very resilient Mayo team and just got over the line. They deserved nothing. They had to go out and earn it and I thought they did that today. I saw Keith Higgins there at the end and you couldn’t but have respect and admiration for that man and his players. But I am just happy the cup is back in Dublin tonight.”

So the championship ended as many predicted, with Gavin’s dauntlessly brilliant and tough city team reclaiming their title and claiming their place among the teams shaded by various decades of history.

Yes, Philip Lynott’s voice rung out across the north inner city as the sun fell across the rooftops but the 1970s gang – Kevin Heffernan’s be-flared and long-haired heroes – have good company in this millennial generation.

The old cliché applied: Dublin’s quality of reserves is endless. Cormac Costello, seemingly a peripheral figure in Gavin’s imagination all summer, trotted into the bedlam of a chaotic All-Ireland final and contributed a tidy 0-3. Bernard Brogan, held in reserve here, fired a warning point upon his introduction. Those four scores from play exceeded the total from play concocted by Mayo’s starting front six. Winning an All-Ireland final with a forward unit scoring just 0-3 from play is an exceedingly tough task. And it didn’t happen: yet another single, tortuous one-point defeat for Mayo’s masses to dream about through another long, deep winter.

Starring in one of the great All-Ireland contests is no consolation to Mayo but for the rest of the country, this was exceptional sport. The mind games began around four o’clock. Word around the capital was that Cillian O’Connor was a major doubt for the game, having rolled his ankle on a Friday night run around. Shortly before kick-off, it was confirmed that Mayo goalkeeper Rob Hennelly would replace David Clarke, the Ballina veteran who had been enjoying an All-Star calibre season. The presumption was that Hennelly had been called up because of his Howitzer capability with long-range frees. Logic dictated that he would kick them because of O’Connor’s injury. But that never happened. The Mayo captain started and kicked 0-8 from placed balls. Gavin, meantime, shuffled the cards, with Brogan, Michael Darragh Macauley and David Byrne all hooked from the starting 15. Paul Mannion, Paddy Andrews and Michael Fitzsimons were the three incoming players. Of all the changes, however, Mayo’s proved calamitous.

It was obvious after 20 minutes that whatever the rationale behind the Mayo’s goalkeeper swap, it backfired spectacularly. Hennelly, facing the notorious Dublin press on his kick-outs, struggled to find green and red shirts throughout the first half and then delivered a short kick-out just before half-time which led to a turnover and a foul on Connolly by his alter-ego Lee Keegan. The local crowd bayed. Maurice Deegan called the Mayo man over and issued a black card.

The decision cost Mayo their best player and that card proved to be the closing act in the riveting private duel between Connolly and Keegan. For the previous half hour, the pair had been locked into their own world, Keegan shadowing Connolly and watching him obsessively, the Vincent’s man unable to buy a yard of space. There was no talk, just move and counter-move.

Then, in the 18th minute, Keegan had the impetuosity to break forward, tearing into a gap created by a brilliant pivot-turn by Aidan O’Shea, who took possession and turned inside Cian O’Sullivan in one movement. Keegan took the ball at full stride and with James McCarthy and Brian Fenton converging fired a beautiful bullet of a shot past Stephen Cluxton’s right hand.

It was a goal Mayo desperately needed: the aesthete in Connolly might have privately admired it. The competitor in him was livid. His response? To post up on the edge of Mayo’s square, coming out on the turn to meet a low ball and belting an outrageous point with his right foot. The sequence of play was the apex of a duel which was so compelling in that it was threatening to overshadow the final itself. But the card intervened. It looked like an iffy call but Stephen Rochford declined to criticise it afterwards.

“On Maurice Deegan’s angle, I am sure he thought it was a pull down. In fairness, Dublin lost Jonny Cooper. I am not going to be hypocritical and get into a conversation about the referees. They are in a tough position. The margins are tight, like. There is nothing easy in any of the officials and I thought in fairness to Maurice he did as good a job as anyone.”

Deegan is a fine, experienced referee but at times here he resembled a mild-mannered barman trying to cope with a thirsty gang of Hell’s Angels at last orders. Some of his calls were fussy while elsewhere, the exchanges were loose and furious. Cooper found himself black carded minutes after he was poleaxed by a Mayo player following Keegan’s goal. He must have wondered at the justice in that.

The match was level at 0-11 to 1-8 when poor Hennelly’s miserable day was made complete when he dropped a ball he has caught a million times, which resulted in his black card foul on Andrews and a penalty which Connolly fired past Clarke seconds after he had fastened his gloves. In a contest of incredibly fine margins, Mayo had somehow managed to gift Dublin with another goal that was arguably more damaging than the two freak scores they conceded in the drawn match.

“We did our analysis with Dublin and they were pushing four guys inside and were trying to cut off our short kick-out and were getting more reward off that,” Rochford said of the reason for the goalkeeping change.

“We felt that was something they were going to maximise further and Robbie’s kick-out gave us more length and option.”

Connolly later made light of the immense pressure of his penalty kick.

“Just take a breath. Put it in the corner. And walk away. That’s all it is, you know,” he said with a grin afterwards before summing up Dublin’s attitude to this season.

“We weren’t going to defend the Sam Maguire, we were going to attack it and try and win it.”

And they did that in abundance, fearless in the way they steamed through the centre of Mayo’s defence in those gripping, draining last 10 minutes and keeping their noses in front. Somehow the challengers stayed in touch through instinct and muscle-memory: a thunderous point from the blue by the wonderful Patrick Durcan, another neat effort from Kevin McLoughlin.

It was enough to keep the collective Mayo dream alive – right until the very second when it was all over and Dublin joy spread across the field, across the city.

“You know, the majority of that group have been in four All-Ireland finals and three defeats,” Rochford said of his players.

“They are very crestfallen. Devastated. You don’t put the last nine or 10 months of your life into an intercounty scene to get absolute dejection. I couldn’t be prouder of them. We had a free there to draw and we could still be out there looking at them playing. We will see how we regroup.”

Dublin will rightly be favourites to become the first football team to win three All-Ireland titles in a row since Kerry in the mid 80s. And needless to say Mayo, faraway and so close, will return as obstacles in chief next year. You would say that this has become unbearable for Mayo – except that it reached that stage many years ago.

Jim Gavin should permit himself a bow. These are rare times for city football, auld and new.