Just another day at the office for Gavin and his team 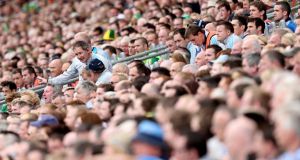 Dublin manager Jim Gavin talks to some of his backroom staff at Croke Park during the All-Ireland football semi-final against Kerry. Photograph: James Crombie/Inpho

There was a distinctly funereal feel to Jim Gavin’s postmortem after Dublin’s seven-point All- Ireland semi-final win over Kerry, that was completely at odds with the thrilling game of football that had just unfolded before the eyes of the nation at Croke Park.

It was, no doubt, a modern day classic, one that equalled any one of its previous famous instalments for drama and quality, but for Gavin it was just another workday done.

“I wouldn’t look at it that way,” he responded dryly when asked if he could appreciate the calibre of the contest which Dublin won 3-18 to 3-11. “I would look at each play as it develops. That’s the way I look at the game. There were, I don’t know, 80 plays in that game there today and you’re trying to watch each one as it develops and trying to focus on it.

“I don’t lift my head above that bubble. I just try and stay in it and try and stay focused and try and do the best for the players. Because ultimately, they’re doing the best decisions on the field of play but if you can make any tactical substitutions, that’s what my job is and what the management team’s job is.”

Pressed on whether there was even a hint of relief, joy, pride ... anything from the win, he added: “That’s my job as a manager, and Stephen’s job as a player, to win games. So job done, as far as we’re concerned. There is a buoyancy and a great energy and happiness within the squad but it was such a competitive game against such a great side like Kerry.”

His goalkeeper and captain was alongside him, even more non-plussed by the occasion, and looking like he’d rather be anywhere else.

Even when Dublin trailed by two at half-time, Gavin insists there was no panic, even after they had conceded three goals. Not only that, but he “wasn’t surprised” by it.

“I wasn?t surprised that they got those scores. I obviously looked at them in their tapes, against Tipperary, Cork, Cavan; they did exactly the same so it was no surprise that they got them. They have lots of football and some fantastic forwards. At half-time there was a great sense of calm among the players and we focused with energy and enthusiasm to go harder in the second half.

“We look at the game over the full 70 minutes and so whether you are up or down at half-time does not really make a difference, it is when the final whistle is blown that is the time you need to be ahead. The team showed great character, resolve and determination and a willingness never to quit manifested itself. We were asked questions here today and we answered most of them.”

The result was in no small part down to the goal from Kevin McManamon, whose strike late in the 2011 final swung it against the Kingdom as well. He was introduced for Bernard Brogan in the 65th minute and put Dublin three points ahead with a smashing strike past Brendan Kealy after Michael Dara Macauley batted possession his way from a midfield skirmish.

“Well, the game wasn’t over at that stage,” admitted Gavin. “And for me, I see Kevin at training, so I wasn’t surprised to see that finish. We want players to create opportunities like that. And they took a bit of a hammering, in certain quarters, for not taking the opportunities in the Cork game. But we certainly encourage them to play.”

A point from Diarmuid Connolly and a goal from Eoghan O’Gara followed as Dublin completed an eight-point swing having trailed by a score with three minutes to go. It was an awful kick in the guts for Kerry and both managers agreed it wasn’t an accurate barometer of what had gone on before.

“It is (harsh),” said Gavin. “It probably was not a fair reflection on the totality of the game, but we would have been happy with a one-point victory today.”

Eamonn Fitzmaurice would have taken a “dirty one-point win” too, but, he said: “At the end of the day, whether we were beaten by one or seven, it made no difference.”

He added: “Dublin got fierce life from the Kevin McManamon goal and then Diarmuid Connolly got a point straight after and then they got the goal right at the end. We went very direct in the meantime, looking for a goal when there was probably enough time to get a few points. I am not worried about the seven-point margin we were there right at the end, they then got the goal which decided the game and unfortunately we came out the wrong side of it.”

Now is not the time, he said, for the likes of Tomás and Marc Ó Sé and Paul Galvin to make any rash decisions about where they are their careers, but he admits some will have to make tough decisions.

“When I took the job last year I didn’t think any of them had to retire, purely based on effort and whether they were over the hill. Whether lads in their mid 30s can give the necessary sacrifice they gave this year, that is a decision for them. For those with young families it is a very demanding schedule and so that is a decision they have to make for themselves in their own time, today is not a day for decisions.”

For the younger generation, defeat will be tough to take, of course, but it may build character. Scant consolation now.

“I have been saying it all year, we have a lot of faith in those young lads, we have been looking at them in training all year and I had no doubts they would deliver for us today. You can’t put that into a fellow in terms of training or anything else, workshops or anything else, you have to experience that as a player in Croke Park, full house, a really intense fast game.

“Of course it will stand to their development, but we would prefer to have a final to prepare for in three weeks’ time.”

Solskjaer scathing of England’s handling of Mason Greenwood 11:57
Rory McIlroy starts well in US Open, Zlatan ensures there’s no Tallaght fairytale 07:57
Naomi Osaka to miss French Open with a hamstring injury 07:06
Dual clubs flourishing thanks to knowing exactly where they stand 06:05
James Hume reaping the benefits of Dan McFarland’s call to ‘knuckle down’ 06:00
Crossword Get access to over 6,000 interactive crosswords