John O’Keeffe: Kerry have edge – but expect the unexpected 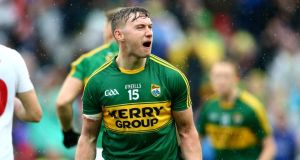 Not even the best forensic scientists could sift through this All-Ireland final and be certain of arriving at irresistible conclusions. Kerry and Dublin are two evenly matched football teams, potent in attack but perhaps also a little vulnerable in defence.

There are lots of variables to consider, but I expect something unexpected: what about Tommy Walsh? We haven’t seen much of him this year, but he may well be the little trick that Éamonn Fitzmaurice is hiding up his sleeve.

Or Cormac Costello? He’s well able to unhinge any defence, and we haven’t seen much of him with Dublin either.

Every All-Ireland final throws up a surprise or two, and something less obvious may well be the winning or losing of this game.

Kieran Donaghy not starting for Kerry is surprising, although not entirely unexpected. Clearly, Fitzmaurice is preparing to play a more massed defence, with probably just four forwards up front. He’ll want those forwards to be more mobile, to play with pace on the break, and Paul Geaney fits that role.

Donaghy is still an excellent option off the bench but Geaney brings a different dynamic. He’s a brilliant finisher, and somebody who invites the quicker, lower ball which Dublin won’t like.

Kerry’s changes in defence are certainly unexpected, but my understanding is that Paul Murphy (hip) and Marc Ó Sé (hamstring) are both nursing injuries; they are obvious losses. Fionn Fitzgerald and Aidan O’Mahony would have been better coming off the bench, so this does weaken Kerry’s starting line-up.

Still, I certainly don’t expect a shoot-out like the 2013 semi-final between the sides, or indeed the 2011 final. Fitzmaurice will have seen the vulnerability down the centre of Kerry’s defence, especially against Tyrone, and he will know Dublin have the power runners to thrive on that, so expect more Kerry players in that area.

Further out the field, he’ll also need to watch Dublin’s strike runners, Jack McCaffrey and James McCarthy. Curtailing them would certainly help limit the Bernard Brogan and Paddy Andrews threat. Indeed both teams have shown defensive vulnerability, which is why Cian O’Sullivan is so vital for Dublin. Whether O’Sullivan is okay or not, there must be some doubt about his fitness.

He’s been excellent all year in the sweeping role, his pace helping to limit the opposition’s goalscoring threat. His role won’t be easily filled if his hamstring gives up, because from midfield up Kerry have marginally better players, who appear more composed when creating and taking scoring opportunities. And that’s the main reason why they’re more likely to win.

Four weeks without a game is a slight worry for Kerry. Dublin are definitely well served by that second game against Mayo. They learned a lot from the first game, and put it into practice. They set out to play the game at a high tempo, and kept it up relentlessly – starting with Stephen Cluxton’s kick-outs. And they were well able to sustain it until the finish, helped by the players who came off the bench.

Mayo just couldn’t live with them going into the last 10 minutes – the same thing that happened to Kerry in the 2013 semi-final. Still, Diarmuid Connolly, Paul Flynn and Dean Rock hardly featured in that replay and they’ll need to step up for Dublin to have any chance of winning.

One of the things that counted against Mayo in the end was their inability to keep tackling hard. They’re an excellent tackling team, but they just ran out of steam. Mayo were loose in their marking as well, when you look at the room Andrews, Brogan and Ciarán Kilkenny enjoyed, and you can expect Kerry’s man-marking to be a lot closer.

The Cluxton factor has been analysed to death, although one thing is certain: Kerry will definitely put pressure on his kick-outs, definitely press the Dublin full-back line, to stop that short ball. Kerry will also adopt a type of zonal defence, spread out across the half-back line. That will put some pressure on Cluxton to kick the ball at least over 30 yards. It requires huge energy and concentration from players like James O’Donoghue and Johnny Buckley. Dublin are masters of freeing a player up, and Kerry simply can’t allow that. Connolly and Flynn can come from deep, or Cluxton can also target the wings. Because the last place he will kick the ball is down on David Moran and Anthony Maher.

Still, Kerry will not be sitting back on the Dublin kick-outs. Kerry will also favour the aerial contest, while Dublin will be trying to make it the opposite. Everyone knows the cliche that goals win matches, and in this game it will certainly prove true. The question is, who can conjure up more of them? Dublin are not so dependent on Brogan and I feel they are more adept at giving that extra pass to create goals. But I feel Kerry, marginally, have the greater goal threat, through the Gooch, O’Donoghue and Paul Geaney.

Neither team will back down in the physical stakes, which will put discipline to the test. The black card is there to deal with that, and no one wants to get black-carded in an All-Ireland final. A lot will depend on the interpretation of the tackle.

Both benches look equally strong. Could Kevin McManamon come back to haunt Kerry again? Alan Brogan has a very shrewd head. So I see both benches being emptied, well before the finish, as both teams look to sustain the pace. Dublin will set the pace, and it’s essential for Kerry to stay with it, but again it’s from midfield up where this game will be won, and why Kerry will win it.

Aryn McClure’s Irish adventure could come to a winning end 06:30
Aidan Rochford ‘loving’ being back on Wexford panel 06:00
Post-World Cup years throw up more debut opportunities for debutants 06:00
Women’s football is back and better than ever 06:00
Andy Farrell sidesteps Saracens issue at Six Nations launch 06:00
Crossword Get access to over 6,000 interactive crosswords