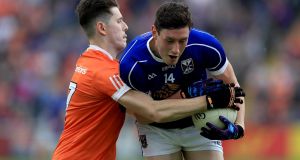 Cavan’s Michael Argue in action against Armagh’s Joe McElroy. Cavan people feel that their team is on the move. Photograph: Donall Farmer/Inpho

The weekend just past started for me in Spain and I ended up watching Cavan versus Armagh at Breffni Park. I was invited to a conference on psychology in football which took place in Bilbao. There were 180 delegates there, mostly coaches and psychologists.

My talk was on the competition aspect with a view to coaching and the psychological side of things. It brought in my approach with Donegal but it also incorporated things like the culture within the group and coaching and motivation and building a team.

It was great to sit back and listen to people from different backgrounds discussing similar topics and challenges and how they manage people and their general approach.

It struck me that the Spaniards think and talk about sport at a fairly deep level. All the coaches seemed to have a very detailed philosophy in their own mind and were very comfortable with that and with how they operated and what was involved. And even though they are very different coaches, there were a lot of similar threads in terms of the detail and what they were about.

They were open to new ideas, which isn’t all that common. And they had this willingness to share ideas as well. They gave of themselves and they expressed their weaknesses and talked about the areas in which they struggle in themselves. They weren’t trying to paint this picture of perfection when it comes to their roles.

After the concluding session, we arranged to meet up that evening to watch the Champions League final. So you had eight or nine sports psychologists gathered in Molly Malone’s pub. There was a terrific atmosphere in the place. There were several Madrid fans of both persuasions kitted out in their respective shirts. And it felt like a very big, important deal.

It reminded me of the All-Ireland fervour in Dublin in that sense. It was kind of frenzied with several televisions up very loud and the interviews beforehand and the snippets of the game getting rousing cheers. So the anticipation was huge and it was great to experience it in Spain.

And the big disappointment was that they brought so few of the qualities – which have made them what they are – to the biggest game of their season. There was a lot of debate among our group as to why that was.

My sense was that they just weren’t their normal selves. The compactness was not there. That intensity you expect from Atletico wasn’t there. Even the discipline was absent and they gave Real Madrid the chance to play. Their top quality players had time to turn and get on the ball and do things. Normally when the ball arrives at your feet, you are under major pressure from Atletico players.

And I was thinking back to the documentary. What I had watched that afternoon and was seeing in the final that evening were not adding up.

The documentary was showing these moments of intensity and passion. You were almost brainwashed into thinking this hurricane was coming down the tracks at you. That it was almost unstoppable to play against. And when they played Barcelona, that’s exactly what it was like.

That Barcelona team are masters at playing in tight spaces and under extreme pressure but Atletico absolutely took the game to them. So it was disappointing they didn’t do that in the final. It is not that they played terribly. But they were not themselves.

In our group, people were talking about the close-ups of the players as the match progressed and the desire and hunger and that mentality, that ruthlessness did not seem to be there . . . it was more about playing the game. That was the consensus. I remember it was 29 minutes when Filipe Luis got forward for the first time and Juanfran hardly got forward at all in the first half. Gaps were appearing because the intensity wasn’t there.

It was an interesting one for me because here was the Champions league final and inevitably, 2014 All-Ireland final went through my mind. I was trying to make sense of what was going on. Every team has its core values. Whether you like Real or Atletico, everyone has their own style and so not to impose that on the biggest day of all is a big disappointment.

Here, Real Madrid had a get out of jail card in terms of what the opposition brought. And even though Atletico got themselves back into the game, their normal values and normal formation wasn’t there and they were just trying to get over the line.

And I find in those situations that sometimes luck isn’t with you. Because it is like you desert your own belief system and you are relying on something else that is vague and insubstantial. I am not sure that can work for a team. So there was a lot tears at the end of the game and a lot of pain in their eyes.

It was an 8.45pm kick off so it was 12.15am or so when we left. My alarm went at 6am. I had a taxi to the airport for 6.45 am. I had travelled on the Friday and it was a long day and then the conference was all day Saturday.

So when the alarm went I was thinking: ‘Aw my God’. And I was dreading getting out of my bed. And then I had this thought: ‘how bad must Diego Simeone and his players be feeling right now’?

And the odd thing was, I automatically felt better. I felt energised and fortunate because again I thought back to 2014 and the morning after that final. And honestly it is the worst place you can be in your sporting life, having to face that day. You feel stunned. That is the only word. You feel stunned and numb. You are struggling to work out what happened. You are walking about in a daze.

Everything else around you – real life, in other words – becomes meaningless. You are base line operating. You are vacant and in a different place. And that feeling isn’t going away any time soon. You know you have to put yourself through the torture of processing it and coming out the other end. And for a huge game, like the Champions League, that can take months. And that’s what the Atletico management and squad are facing into.

I had three flights home. Bilbao- Barcelona. Then Barcelona-Dublin. Then Dublin-Carrickfin. It was nine o’clock on Sunday night when I got home.

I remember sitting in the plane and I looked out the window and there was another plane coming at us ninety degrees a few thousand feet below is. I’ve only ever seen it once or twice before. The planes intersected at the same time and it gives you a very clear of idea of just how fast these things go. And I couldn’t remember what leg of the journey I was on. It was a Lost In Translation moment.

Simeone played with attitude and intensity and he manages in that fashion as well. But Real need someone who can carry the weight of expectation fairly easily and Zidane seemed to do that on Saturday night.

So – on a different scale! –- the Cavan squad and management seem to have progressed. The interviews afterwards were very interesting. Seanie Johnston, in particular, was revealing in what he suggested. Cavan weren’t all that excited to beat Armagh. They expected it. And now they have a date with destiny with a highly rated team. So they won’t be backslapping. They are ready to focus on how they can beat Tyrone. Even when Armagh threatened, they stuck to their game plan. I also liked the depth of the bench.

And it is about time that has happened with Cavan. This is a county that has been in five Ulster U-21 finals in a row and they have won three so they should have a good strong panel of 26 now. They seemed in control and there is a sense of anticipation there. The same is true in Tyrone. They have a young team. They are coming. That’s what makes the Cavan-Tyrone match so tantalising. Only one county is going through.

There were conspicuous gaps in the Armagh performance. Their attitude was good but then there were sudden gaps in the structure which made it easy for Cavan. I felt they tried hard and they played for the manager.

Let’s not forget that a decade ago, Armagh football was the envy of the country and Kieran McGeeney was driving that; he was the exemplar. For supporters, if they can see progress, it is something. But it was hard to glean that from Armagh on Sunday whereas there is no question that Cavan people feel that their team is on the move. And that can generate a powerful momentum.