Late points a little harsh on the Australian comeback 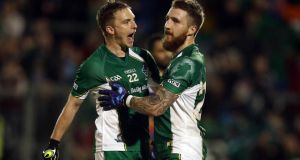 It’s the way of the international rules series these days that the actual matches have been overtaken as talking points by the existential concerns that hover over the future of the game. That hasn’t changed after Ireland’s largely untroubled victory in Saturday night’s first test in Kingspan Breffni Park.

Australia took too long to settle and although they hit back impressively in the third quarter, Ireland held them out and re-asserted their control towards the end of the final quarter to bank a 22-point lead going into next weekend’s second test in Croke Park.

The visitors’ policy of selecting en masse the AFL Indigenous All Stars didn’t pay off, as the cohesion and team unity (the selection played had played together in an exhibition match at home earlier this year) engendered by the initiative didn’t outweigh the players’ inexperience and the customary problems caused by being unfamiliar with the round ball.

The easy explanation that not all of their best players are suited to the international game shouldn’t obscure the hardly surprising precedent that the best Australian teams are those containing the biggest names from the AFL. On Saturday night for instance Lance Franklin - one of the most prominent players Down Under and who has recently made a big money move to Sydney - had a big impact but isn’t scheduled to be around for Saturday, as he is committed to a friend’s wedding.

Adding to the problems for Australia was the strangely slipshod situation in which they travelled with only 21 players, two short of a full match-day squad, and manager Michael O’Loughlin’s attempts to explain this away by saying that their attitude and work-rate were more important than the numbers was unconvincing.

For the first time in a series Ireland also had a physical advantage, enabling the home side to trump their opponents in two of the traditional areas of Australian advantage, competing in the air and the physical exchanges. O’Loughlin referred for instance to the home side’s ability to break tackles.

AFL teams generally take time to warm up and in Saturday’s first half Ireland were dominant. Captain, Michael Murphy got the scores rolling in the first quarter with a couple of overs (equivalent of a GAA point and worth three) and took a spectacular mark in the ninth minute (unfortunately he spoiled the effect by kicking away the possession). Murphy’s well-publicised club final yesterday didn’t appear to be inhibiting him and his manager Paul Earley ended up lamenting how his team had failed to bring the big Donegal forward into the game in the second half.

Dublin’s Jack McCaffrey switched on the turbo a couple of times in the match and early in the second quarter, a lightning break set up Paddy McBrearty for a goal chance but Lindsay Thomas executed an emergency tackle to clear the danger.

In general though, Ireland’s forwards were too sharp. Paul Flynn had an excellent match, making himself available for marks at either end of the field and kicking a fine over in the second half. Ross Munnelly ended up as a top scorer and showed nerve and composure under the mark while Seán Cavanagh showed all of his experience and quality to gather ball and dispose of it effectively.

He should have had a goal early in the second half but improvised goalkeeper Ash McGrath mad a point-blank save,

Steven Motlop was the best of the Australian forwards in the first half although Franklin was an involved presence throughout. By half-time Ireland led 28-9 and an embarrassment was on the cards.

It was immensely to the credit of the visitors that they hit back so convincingly in the third quarter. Gone was the aimless pumping of ball into unoccupied spaces and in its place, more measured short-range passing and skilful movement of the ball closer to goal.

Motlop and Franklin pulled back early scores by Louth’s Ciarán Byrne, now bound for Carlton, which had pushed the advantage to 33-9 but more impressively they reacted swiftly to the morale crush of the first goal.

It came from Ireland’s only AFL practitioner, Zac Tuohy. The Laois man had pushed up in attack and took a smart pass from Paul Conroy to blaze his way through the middle of the defence and side-foot the ball into the net.

Within four minutes the tireless Eddie Betts hunted down Chrissy McKaigue in the Irish defence, tackled him and took the loose ball in on goal before placing Jake Neade to slip the ball into the net. Further scores followed including a great over from distance by Alwyn Davey. The margin was down to 12 and Australia had won the quarter 18-11.

Five minutes into the last quarter, Betts again set up an even better goal chance for Motlop but unfortunately for the otherwise impressive forward, he sliced the ball off the post in front of an empty goal and the chance to get the deficit down to five was lost.

With the revival threatening to convulse the test, Ireland rallied. The key score was a goal scored after Kevin McLaughlin had fastened on to a ball breaking off a free dropped in by Murphy. They rattled off eight points in the closing couple of minutes to stretch the lead to 22, a little harsh on the Australian comeback but reflective of the winners’ control of the match.

It was well behaved apart from a tussle between Aidan O’Shea and Sharrod Welllingham and a scatter during which Lance Franklin threw a couple of punches. Finally Aidan Walsh was stretchered off but the vice-captain’s injury doesn’t appear to be anything as serious as originally feared.