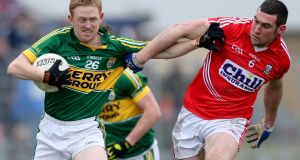 At last some good news for Éamonn Fitzmaurice and his beleaguered Kerry squad as they travel to play Down this Sunday, a game Fitzmaurice knows his side have to win.

After losing to Dublin and Roscommon, Fitzmauricehad good news when it was revealed he is has two of his big hitters back. Captain Bryan Sheehan, who was on club duty, and Colm Cooper, who had shoulder surgery.

“Obviously we have no team picked yet and we will have to see how the football goes this week,” said Fitzmaurice. “But Marc Ó Sé is back in the reckoning. Colm Cooper is back in the mix, as is Kieran Donaghy. Peter Crowley is also back in the reckoning but possibly a week or two too soon. Bryan Sheehan, Aidan Walsh and Denis Daly from the St Mary’s team that won the All-Ireland Intermediate club, as well as the Templenoe pair of Tadgh Morley and Gavin Crowley, who are back from club duty.”

Fitzmaurice admitted that the availability of pitches has been a drawback: “It’s been challenging because everywhere is so wet and I imagine it’s the same all over the country, but finding pitches has been troublesome.”