Despite boost of securing first possession in either half, the benefits are often short-lived 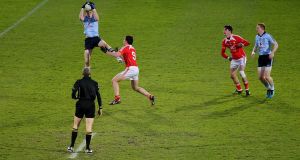 The days of four midfielders all contesting the ball, flung in on them loosely by the referee during a throw-in, are well gone. Photograph: Lorraine O’Sullivan/Inpho

The modern game, for all its complex game-plans and mechanics, is still an unpredictable one. Yet two moments in every game are guaranteed: the referee will throw the ball between opposing midfielders to start both halves.

For those few seconds the four midfielders will look to out-jump, hold off and outfox each other to give their team the first possession of the game or half.

It’s a chance to set a marker for the 70 minutes of attrition to follow in the middle sector. Yet with the emphasis on midfielders claiming primary possession seeming to decline year -on-year, are these throw-ins just two moments that are no more exceptional than others over an entire game of Gaelic football?

Over the four league finals this year, three of the last four All-Ireland finals and last year’s three Championship semi-finals, 70 per cent of throw-ins won led to the first score of the half. From the four divisional league finals this was the case for seven of the eight.

In last summer’s Ulster Championship meeting of Monaghan and Cavan half back Karl O’Connell bursted up from the half back line to expose the two rare six-on-six opportunities against Cavan’s padded blanket defence,, scoring an excellent point upon the resumption of the second half and almost engineering a goal off the first half throw-in. It’s something he has been replicating in this year’s league campaign.

He has been an example of how beneficial winning that first possession can be; however, in terms of momentum gained from winning the throw in, the statistics garnered over the 10 games analysed suggests that for whatever mental boost an early throw-in win and subsequent first score generates, it’s short-lived.

Teams who won the throw-in and scored first over those 10 games managed an average of just two consecutive scores at the start of the relevant half, with very few repeats of the 2012 All-Ireland decider when Donegal burst into a 2-1 to 0 lead after putting bodies on the line to win the first throw in.

Furthermore teams who won the throw in only went on to win that particular 35 minutes on nine out of 20 occasions. While the team who win the game-starting throw-in eventually won only 60 per cent of those games.

So while the throw-in clearly leads to scoring chances and conversions, it does not necessarily have much effect on the overall outcomes of games. This may be because only one of the first scores registered in those games was a goal. That was Michael Murphy’s in the 2012 All-Ireland final. So perhaps teams need to be going for the jugular early on, rather than the traditional advice of just getting a score on the board early on? Take your points and the goals will come? How about get your goals in when the opportunity is nigh and the points will come?

As for the throw-in itself, the days of four midfielders all contesting the ball, flung in on them loosely by the referee, are well gone. As, for the most part, is the adaption of the bigger midfielder from each side looking to tap the ball down to their patient partner-in-crime on their goal’s side AFL style.

Dublin’s midfield duo like to mix it up, sometimes falling back on the tap down, while other times Brian Fenton will back himself for the catch; on other occasions they will look to get up and simply break the ball, prompting all of their middle eight to get in and suffocate the breaks.

In the 10 key games watched for this piece, only 35 per cent of the time did players attempt to tap down possession to their team mate. The rest of the time players looked to get up and contest by catching or just making a nuisance of themselves so as to prevent a clean catch by their opponent. Although in this year’s league final, six of the eight throw-ins were tapped down, reflecting a return to this safer tactic (both players remain goalside even if possession is lost) which has been quite noticeable in the league.

Sportspeople often refer to “controlling the controllables”, so as the championship moves up the gears this weekend, it’ll be interesting to see how the midfielders approach this certainty before each game.