Finishing lets Mayo down against slick Tyrone side

McCurry typical of clinical outfit, finishing with 2-4 against the All-Ireland finalists 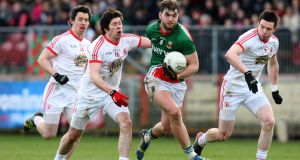 Aidan O’Shea of Mayo gets away from Seán Cavanagh, Mattie Donnelly and Conor Clarke of Tyrone. Photograph: Darren Kidd/Inpho/Presseye

Opening day trajectories were maintained in Healy Park before a crowd of 6,351 yesterday when a lively Tyrone team condemned All-Ireland finalists Mayo to another defeat.

James Horan was frustrated at the missed chances and his team are in the AFL Division One relegation zone despite shooting an average of 0-20 (1-17) per match. But for Tyrone it was further evidence that their new generation of forwards can provide the basis of a renewed challenge for the top prizes.

That was ultimately the difference between the sides because Mayo created plenty of chances especially early on but, as acknowledged by the team’s manager, their execution was poor. Tyrone on the other hand were clinical – if that’s not too dispassionate a description of a portfolio of scores that included some virtuoso shooting – and it wasn’t until the 44th minute that they hit their first wide of the afternoon.

Ironically the distinction fell to Darren McCurry, who otherwise was in sharp form and finished with 2-4 – all but one point from play.

Mayo created, conservatively, five goal chances but four flew over for points and one drew a good save from Niall Morgan.

“We started off well and had three or four very good goal chances but executed them very poorly,” said Horan. “I don’t know if they were the fully committed goal chance you need to when you are through like that – very similar to Kildare actually and we didn’t take any of them and that’s about seven or eight goals chances that we haven’t got a return.

“When you are on top like we were at the start of the game you need to take those. But we didn’t and whereas Tyrone . . . got a lot of points from a lot of different angles and a lot of different bits and pieces. A lot of the trouble we ran into was our own trouble today.”

Once the early storm had abated Tyrone set about their business impressively. The full forwards turned the screws. Matthew Donnelly at full forward had a terrific first half. He scored five points from play, taking scores off all three markers detailed to take care of him. Kevin Keane suffered most before Colm Boyle took a brief turn and eventually Ger Cafferkey, who did best until injury forced his replacement.

There was a short interval and then in the 21st minute Donnelly came deep to win the ball, placed Harte for a run and he supplied McCurry in sufficient space to finish powerfully to the net: 1-4 in six minutes and a seven-point lead.

The other corner forward, Ronan O’Neill, was also excellent. He didn’t score from play but was involved in several scores, including six assists in the first half.

Although Mayo rallied the margin was still six at half-time, 1-9 to 0-6. Yet the Connacht champions had mounted a series of attacks, breaking from the back and threading decent ball through to Andy Moran in particular and Kevin McLaughlin who worked hard. But they lacked their opponents’ penetration.

Keith Higgins was required back in defence in the second half, as Mayo’s injury catalogue got even bigger thanks to hamstring injuries to Cafferkey and Colm Boyle.

They did launch a third-quarter revival – Aidan O’Shea getting a grip at centrefield where generally Colm Cavanagh had been more conspicuous – and after McCurry had sniped the first score of the second half, Mayo hit six of the next seven points. Rookie Adam Gallagher was to the fore in this phase, kicking two from play and two frees.

Again though, possible goal chances went untaken. With just two points in the match - 1-11 to 0-11 - wing back Ciaran McGinley stopped the rot by counter attacking and scoring Tyrone’s first score in 13 minutes.

Pivotal moment
By now Sean Cavanagh had made his first appearance of the season and it was his raiding of a Mayo kick-out that set in motion the decisive score in the 63rd minute. Quickly the ball went to Colm Cavanagh, McAliskey and O’Neill, who cleverly played in McCurry for his second goal and a 2-14 to 0-13 lead.

Mayo retrieved a couple of points but it was all over.

Mickey Harte was pleased to reflect on an unbeaten start to the season and its implications.

“It is nice to stave off the relegation problem and it could take a long time to get another two points. It is better to be in a place where if you get two more you would be looking at the right side of the table rather than the wrong side.

“We would have to be very happy with the economy of our finishing in the first half and it really set us up for the win. We were very good we had 10 scores from 13 attempts and that does not often happen.

Manchester City’s Kevin De Bruyne ruled out for up to six weeks 14:33
Angelo Mathews stands up to England attack as Sri Lanka hold firm 13:09
Conor McGregor feels like he’s ‘only starting’ in UFC career 13:02
TG4 to show matches and highlights from AFLW 12:40
Garry Ringrose returns as Leinster and Munster name teams 12:24
Crossword Get access to over 6,000 interactive crosswords