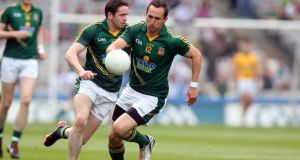 Meath’s Graham Reilly seemed to have carte blanche against Wexford not to have to track back but it is inconceivable he’ll be given that level of freedom tomorrow against Dublin with James McCarthy to keep an eye on. Photograph: Inpho

Nothing has coloured the build-up here so much as the level of shelling that Kildare were forced to cower beneath the longer their semi-final against Dublin went on. It has caused a significant shift away from pondering how Meath might engineer a victory – however unlikely – to how they’re going to keep the score down. So all the talk now is of installing a sweeper to protect the full-back line.

And yet, it’s by no stretch a certainty that Mick O’Dowd will go that route. Meath haven’t played a sweeper in any game under his watch, preferring instead to keep Peadar Byrne funnelling back to pick up ball around his half-back line. They are a team that keeps their forwards playing in attack – Graham Reilly seemed to have carte blanche against Wexford not to have to track back, which left his marker Brian Malone free to trot forward and kick two points.

While it’s inconceivable he’ll be given that level of freedom with James McCarthy to keep an eye on, Meath will still make a point of playing their own game. The idea of dropping someone back in front of Kevin Reilly for the whole game could feel like an admission of defeat.

Handicap
Institutional memory counts for something and Meath don’t take hidings from Dublin as a rule. The handicap tomorrow is bouncing between eight and nine points but you have to go back 18 years and 12 matches to find a result where Dublin beat them by that much. Indeed, add up the scores from their last six games going back to 2005 and Dublin’s aggregate lead over Meath is only four points (4-80 to 6-70). This fixture’s recent past offers no reason for them to fear a tanning.

That said, Jim Gavin’s side obviously have a bit of shock and awe about them when they get going. What will be interesting though is how they fare when Cian O’Sullivan and Michael Darragh Macauley aren’t given the freedom of centrefield the way they have been thus far. It was when Kildare stopped competing in that sector that the wheels came off and if Conor Gillespie and Brian Meade can break even, Meath won’t be blown away.

What is more likely is a game where they trail Dublin for long periods without ever quite losing sight. Dublin by five.