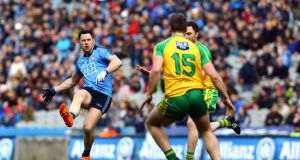 Dublin swept into a fourth successive Allianz Football League final with an emphatic victory over Donegal at Croke Park on Sunday afternoon. A display of accurate finishing dismantled the opposition challenge in the second of a one-sided double bill of semi-finals.

From an early stage Dublin were finding spaces to probe and with their forwards in accurate form - just two missed shots in the first half - they began to move inexorably ahead. As the match unfolded, the accuracy of the winner’s backs also came into focus as drawn forward by Donegal’s familiar tactics Philip McMahon, who also laid on the scoring pass for Bernard Brogan’s goal, John Small (with the assistance of a Neil McGee block) and Jonny Cooper fired over points.

The holders’ team showed two late changes with Cian O’Sullivan coming in at centre back and Paul Mannion at full forward in place of Eric Lowndes and Diarmuid Connolly respectively. Donegal brought in Martin O’Reilly for Mark McHugh - a short-lived switch, as he was replaced injured after 14 minutes.

Both Dublin changes however went better. O’Sullivan maintained the fine form of the previous week, standing sentry in front of the full backs - a lonely posting as Donegal flooded back to congest the approaches to their own goal - and picking off ball as well as initiating attacks. Mannion was impressive and scored two from play, his ball winning and movement notable.

Brian Fenton reproduced the good form at centrefield of the counties’ previous meeting last month and ran things well in the middle.

Dean Rock also replicated his marksmanship from the Roscommon match, hitting two frees as well as a point in the first half whereas TG4 Man of the Match Ciarán Kilkenny scored three from play in the same period.

Donegal initially responded with some good counter-attacking and Patrick McBrearty showed good accuracy from frees and Ryan McHugh’s well judged runs caused trouble for Dublin. In the 10 minutes before half-time however Dublin pulled away with five points to two and a goal chance for Brogan that was blocked by Rory Kavanagh.

On the restart Brogan made amends. Dublin led 0-11 to 0-6 at the break but within a minute of the second half starting he was presented with a great ball from McMahon and slipped the ball past Mark Anthony McGinley and effectively the match was over.

Dublin continued to turn the screw with a steady supply of points - just one wide in the second half and four overall - and could have had another goal but Mannion’s shot was saved for a 45.

Donegal struggled and had to cope with an off day from Michael Murphy, who had five wides in the second half and dropped a ball short.

Dublin face Kerry in the final in a repeat of last year’s All-Ireland final in two weeks’ time.

1 Golf in Level 5 Covid restrictions: Clubs still waiting to hear if they can remain open
2 Gordon D’Arcy: Ireland don’t need to do a Finn Russell on it
3 Hugo Keenan could start in changed Ireland team against Italy
4 Seán Moran: Let’s leave the confusion aside and enjoy this All-Ireland
5 Aki, Ringrose and Henshaw: Brian O’Driscoll has his say on Ireland’s midfield riddle
Real news has value SUBSCRIBE

No underage or minor GAA to be allowed under Level 5 Covid-19 restrictions 08:53
Ole Gunnar Solskjaer hails players after win over PSG 07:57
Rashford gives Man United another win in Paris; Gordon D’Arcy on Finn Russell 07:34
Seán Moran: Let’s leave the confusion aside and enjoy this All-Ireland 06:30
Gordon D’Arcy: Ireland don’t need to do a Finn Russell on it 06:00
Crossword Get access to over 6,000 interactive crosswords