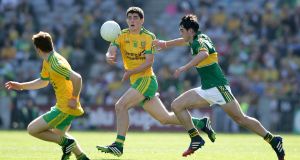 Donegal’s Stephen McBrearty in the All-Ireland minor final in 2014 against Kerry. The assimilation of younger players like McBrearty into the Donegal senior team has caught the eye. Photograph: INPHO

Mayo have acted as a curious touchstone for the more senior players with Donegal. When they beat the Connacht champions in the All-Ireland final in 2012, it was predicted that some of Donegal’s veteran men might ride off into the sunset, content with their medal.

It didn’t happen. The following summer Mayo came up against the injury-ridden All-Ireland champions and gained a measure of sweet revenge by eviscerating them in the quarter-final.

The manner of that defeat led to more definitive pronouncements that the Donegal team had reached the end of the track. Received wisdom held that the cumulative effect of the side’s hard-running game and rigorous training sessions had taken its course. There would be retirements.

It didn’t happen. Last summer the teams met again at the quarter-final stage, Mayo once more looked irrepressible and businesslike in brushing Donegal aside.

The Ulster men had come through a gruelling provincial campaign and lost a teak-tough and mentally draining final to Monaghan.

Now, the announcements were absolute. This was surely the last tour of duty for resurrection men like Christy Toye, Neil Gallagher, Karl Lacey, perhaps Eamonn McGee and Colm McFadden.

They would leave with all the major medals and garlands: they owed nobody anything. They would join Rory Kavanagh in declaring that enough was enough. Winter came. And nobody called it a day. Instead, Kavanagh came back.

The effect, over the first two games of the league season, has been to completely subvert the notion that Donegal has a shallow squad. In selecting new-look teams for his first two games against Down and Cork, Rory Gallagher was able to name a substitutes bench loaded with big names.

Leo McLoone, Gallagher and Rory Kavanagh were among the senior players introduced during the demolition of Down; all three were again held in reserve for the 2-14 to 1-07 win against Cork in Ballyshannon.

Instead it was the assimilation of younger players like Stephen McBrearty and Michael Carroll which caught the eye.

It is only round three of the league but the infusion of new names and the adventure and imagination with which Donegal attacked means that there will be a high mood of anticipation when Mayo and Donegal spar in Ballybofey tomorrow.

“I think that’s true,” says Declan Bonner, the current Donegal U-21 manager. “They have been a lot more offensive, and there is a bit of flair to it and they are still keeping it fairly tight at the back. I know it’s early days yet but the early signs are encouraging, there is no doubt about that.”

“We didn’t know what kind of players we had. But we knew there are always quality players in the county at any age. It wasn’t about a short-term fix. We took a group at 15s, 16s, a couple of years at minor and now at U-21. The idea was that they would have the best opportunity possible to move on in terms of their football, the last piece being that they would have a chance to play senior football.”

Crucially, they decided to train the squad through their U-17 season, a kind of fallow year in the inter-county Gaelic games schedule , so they had momentum going into their minor season.

Stephen McBrearty, Michael Carroll, Eoghain Ban Gallagher are among the players on that side who have featured in the senior side this year.

Carroll has emerged from the Gweedore club, while Eoin McHugh is Kilcar’s latest contribution to the county cause. A son of All-Ireland medal-winner James and a cousin of Ryan and Mark, he has clearly inherited the family trait of concise and unique football intelligence and has speed to burn. It was no coincidence that McHugh gave the assist pass for both goals against Cork.

Ciaran Thompson became the third member of his family to feature at senior level, earning a man of the match award in his debut game against Down and he thrived against Cork at centre forward.

Around the county, other young players have drawn excited notices through their club championship games; Andrew Kelly for St Michael’s and Eoghan McGettigan, who made a sensational impact for county champions Naomh Conaill in the club championship last autumn.

Donegal have lost the last three Ulster U-21 finals, a record which Bonner is eager to rectify. His team begins its campaign on March 16th against Derry in Ballybofey. With many players recently involved in Sigerson Cup duty, it is a particularly demanding period for the younger players.

“It is great to see that it is starting to happen for some of the players,” says Bonner. “But at the same time we have be very careful because these guys are very young, and coming out of minor through to senior we just have to be careful that they are monitored now over the next year or so.

“Once they are out of 21 these guys will be physically ready but they are still in transition in terms of making that step up. We can’t rush these lads.”

The major casualty to the infusion of new talent has been Darrach O’Connor, the Buncrana flier who made a huge impact at senior level in 2014, his Leaving Certificate year, during Donegal’s run to the All-Ireland final. The cruciate injury he suffered in October of last year leaves him sidelined for a protracted period and he seems certain to miss what would have been his fourth consecutive years at U-21 level.

The task for Jim McGuinness in his final two seasons and for Rory Gallagher last year was how best to manage the minutes their senior players were required to play. Gallagher’s debut season in charge was defined by a laughably punishing Ulster championship draw and the training schedule was dictated by that.

This year allows for more leisurely planning, and Gallagher has been at pains to emphasise that the squad has done very little work yet. Donegal have posted 5-29 in two games. It was notable that of the 2-14 registered against Cork, Michael Murphy scored just a single free. He wasn’t even looking to score, operating as a kind of playmaker in the middle third.

The flamboyant scoring makes Donegal a harder read this year and it remains to be seen how Gallagher will use his most senior players.

“The Ulster championship last year was four very big tough competitive games. You are planning for a long way out for it and a lot of hard training done early in the season. And obviously when you get that Ulster title loss in the manner we did, it was hard to pick ourselves up going into the Galway game, even though we won well.

This year Gallagher hasn’t had to call on Toye yet, although he is thought to be in the reckoning for tomorrow’s game against Mayo. But managing the minutes of the senior players may be an easier task this season. A kinder Ulster championship draw has allowed Gallagher to taper the training schedule and they come into this game after a five-day training camp in Tenerife.

“If I look back to 1992, I always remember Donal Reid saying he had played his last game” says Bonner.

“And it was: he finished after the All-Ireland final. And the team had broken up within two years. But this current crop, apart from Rory Kavanagh stepping away last year and then coming back in, the 2012 group is basically there. The likes of Eamon McGee and Colm...they are still only in their early 30s.

“There is a lot of hunger there and they lost the Ulster final last year, the All-Ireland the year before, so they probably see that there is a batch of young lads ready to come in.

“It has been a positive start and hopefully it will be a good year. I think Donegal football will be in a good enough place anyhow. But we just need to be careful.”