Westmeath back to winning ways away to Limerick, as travelling London rattle Carlow 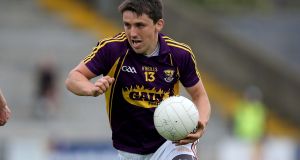 Wexford’s Ciaran Lyng was to the fore in Sunday’s win over Leitrim. Photograph: Donall Farmer/Inpho

The experience and accuracy of Ciarán Lyng and PJ Banville combined to produce a match-winning performance for a Wexford side reduced to 14 men for the second half in Carrick-on-Shannon on Sunday.

The dismissal of the experienced James Stafford for an off-the-ball incident in the 31st minute came as Leitrim had dominated in the closing minutes of the half and led 0-8 to 0-5 at the interval.

Wexford finally broke the Leitrim resistance though, regaining the lead with 10 minutes remaining, they went on to score three unanswered points to fashion a hard-fought away victory.

Westmeath boosted their prospects of promotion with this win against a disappointing Limerick at the Gaelic Grounds.

The visitors got off to a speedy start with points by Ger Egan and Paul Sharry and they led 0-3 to 0-1 when they were awarded a penalty after James Dolan was fouled. Ger Egan then made no mistake from the spot when beating Donal O’Sullivan to raise the game’s only green flag.

By half-time Westmeath led 1-8 to 0-5 and Limerick hopes were dispelled when Egan and John Heslin, with two frees, extended the visitor’s lead further.

In fairness to Limerick they responded and scored five points in succession which left only a goal between the teams. But another Heslin free opened a two score gap again and it was Westmeath who finished best on the run-in, to secure a nine point victory.

A dominant first half in which the visitors established a substantial 2-11 to 0-7 interval lead - provided the basis for London’s merited win over Carlow at Netwatch Cullen Park.

Carlow were completely outplayed in that opening half as London’s full forward line of Rory Mason, Liam Gavaghan and John Daly dominated the home full back line, scoring 1-11 of their first half tally.

London were the more clinical side, kicking only one wide in the game compared to nine for the home county.

The exiles lost midfielder Anthony McDermott and left full back Conor O’Neill to red cards (second yellows), and Mason to a black card, while Carlow’s Paul Broderick was also red-carded late on.