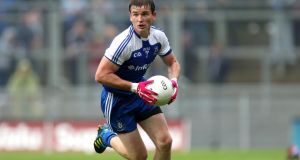 Dessie Mone: “There’s a group of us there who have been around a long time and we sat down and said that we really had a responsibility to try and get Monaghan back competing with the bigger counties. We couldn’t all walk away.” Photograph: Ryan Byrne/Inpho

In a small county, it doesn’t take a huge amount of erosion for the cliff to topple into the sea. For the prime years of Dessie Mone’s intercounty career, Monaghan were a solid proposition right up until the moment they weren’t. By the end of 2010, they’d been Ulster finalists twice and had played more Championship games in Croke Park in the space of five years than they had for the previous 67.

And then, just like that, they melted like chocolate in a car window. In the two seasons after Séamus McEnaney finished up, they played 19 games in league and championship and only won five.

They were relegated twice on the bounce and their only summer victory was against Antrim. If it wasn’t the worst of times, it was at least a reminder of them.

Not that Mone needed his memory jogged. He spent most of his boyhood watching Monaghan getting beaten and while much of the county turned its face away, he didn’t. Or couldn’t. As the youngest of five brothers to play for Monaghan, finding something better to be at on matchday wasn’t an option he was ever presented with.

It presented itself now though. In the winter of 2011, he had choices to make. He was back in college as a mature student, ploughing through a sports science degree that was going to be taking him to Middlesex University down the road and then to UL for a post-grad afterwards.

He’d put down his early 20s selling cars in Dublin but that was a bygone time and this was his future. It would have been a lot simpler if he jettisoned the intercounty part of his life.

“It would have been easy to walk away but that’s not the type of person I am. It’s not how I was brought up. And it’s not how most of these fellas were brought up.

“There’s a group of us there who have been around a long time and we sat down and said that we really had a responsibility to try and get Monaghan back competing with the bigger counties. We couldn’t all walk away.

“You’re talking about people like Paul Finlay, Dick Clerkin, Vinny Corey, Owen Lennon. Those lads are very strong-willed. We just decided that it would be too easy to walk away. And really we couldn’t just walk out and leave Monaghan where they were at the time. We had to get them back up to where they had been.”

Monaghan is who he is and what his family is. His oldest brother, Rory, was man of the match in a McKenna Cup final as a 17-year-old in 1995.

Ever since, there has almost always been a Mone on the county panel. At one point during the league of 2004, there were four of them. Conor and Fergal flitted in and out for a time, Rory emigrated when he was 20. John Paul and Dessie became stalwarts.

“I would have always said that Rory was the best of us. Naturally-built, six-foot two. Didn’t need the gym, had a fantastic left foot on him. He played against Derry in 1995 in the McKenna Cup final. He was still a minor that year. It was his debut and he scored a cracker of a goal.

“That was the only time in I can remember Monaghan ever lifting any silverware when I was growing up. Even when I started with Monaghan, we were training in a field. Just an old field, like. It was hard times really, and there wasn’t ever much to shout about.

“That’s why you have to admire people like my brother John Paul and Damian Freeman and Dermot McArdle. These boys stuck with Monaghan through thick and thin, they never let the phone ring out. They were always there to put on the jersey even when there was no big days. That’s why we all look up to them.” Best shut-down defender For the four or five seasons when Monaghan were in full-cry, Mone had been their best shut-down defender. For his first game in Croke Park in 2007, McEnaney had no problem sending him to shackle Colm Cooper.

He was their attack dog, the poster boy for their no-let-up approach to the game. McEnaney said in these pages at the start of the championship he always liked his teams to come off the field with at least a few yellow cards to their name. Mone wasn’t the type to disappoint him.

“Ah yeah, well every team needs a fella who can mark these boys who are expected to score 1-3 or 1-4 in a game. You’re never bigger than the team, you do your job to the letter of the law. You do it to the best of your ability and within the rules as well.”

He bursts out laughing as he says this, knowing well what’s coming. Mone in those days was the Ulster footballer even Ulster footballers hated playing against. Talented, sure. But you wouldn’t mistake him for someone pricked by conscience anytime he coloured outside the lines either.

“I was very good at staying within the rules, actually,” he protests, still chuckling. “I got a few talkings-to but nothing ever really that major.

“I always checked the rulebook before I went out to see what I could get away with! What I could do and what I could not do. You know, the rules change so much every year that it’s easy to forget what you’re allowed to do.

“Look, I think that’s one of the great things about Gaelic football. You’re allowed to take it to the line, you’re allowed to push it. As long as you don’t go over that line, you’ll be fine. The physicality side of it is about testing yourself and testing the work you’ve done in the gym against the best footballers in Ireland. The only way is to get stuck in in those type of games.”

Under Malachy O’Rourke, his game has evolved. No longer the velcro-wristed corner-back, he’s been reinvented as a marauding wing-back.

His point midway through the second half of last year’s Ulster final brought the house down, convincing whatever stragglers there were in the home crowd this was actually going to happen.

By year’s end, he had earned the third All Star nomination of his career.

But now, there’s Tyrone. To rob a Nick Hornby line, they’re the small shadow on the X-ray of any modern Monaghan player’s career. Mone has played Tyrone seven times in senior intercounty and only beaten them once, a league game in Inniskeen in 2010. He even lost an Ulster minor final against them back in 2001 when a team with him, Corey and Finlay just lost out to – what else? – a Seán Cavanagh-inspired Tyrone side.

“They’ve always had a good team,” he shrugs. “They were winning three All-Irelands. We came at a time when their players were at their peak. And we were probably just getting used to winning, or learning how to win. We didn’t have enough experience in some of those games just to finish out the match. I think they always had that over us. Hopefully now, we’re getting there.”

Until they do, the feeling of business unfinished will never quite go away.