Derry see O’Boyle and Bradley partnership as key to success 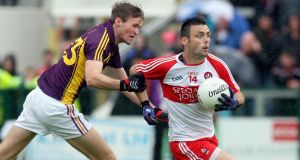 Derry boss Brian McIver believes a partnership between Cailean O’Boyle and Eoin Bradley will be key to his side’s progression this summer. The team will meet one of Tyrone, Tipperary, Armagh or Galway in round three after a comfortable win over Wexford yesterday, in which O’Boyle starred with three points from play.

Bradley played an hour after his European exploits in Belarus with Glenavon during the week, and McIver sees that combination as the key to reaching the last eight of the Championship.

“I was very tempted to take Eoin Bradley off because he had a match during the week but I wanted him to stay on and get him playing along with Cailean. There’s wee signs that’s starting to happen, which is a big plus for us,” said the Derry boss.

The first half hour of the game was defensive. Wexford saw Derry’s one sweeper and they allowed Joey Wadding and Graeme Molloy both to sit free.

They began by double-marking Bradley until the Glenullin man came out. But the more emphasis Wexford put on stopping him, the more space O’Boyle got. It was he, with the aid of Fergal Doherty, who forced the score which finally put daylight between the sides. A long ball from Bradley towards O’Boyle broke and Doherty, though visibly struggling with injury, smashed in along the endline. He squared and O’Boyle fisted off the bar, with Brian Malone unable to grasp the greasy rebound and spilling it into his own net.

Wexford came out man-for-man, and while Derry failed to fully utilise the space they were afforded they were always comfortable in picking off their opponents. With O’Boyle’s display keeping the scoreboard ticking over, the hosts did enough to fend off the shock that Down suffered at Wexford hands.

1 Saudi Arabia-funded takeover of Newcastle United in serious doubt
2 Gerry Thornley: Home and away Six Nations could be its ruination
3 Net-tricks: How John McEnroe became the inner voice of a 15-year-old girl
4 The story of Mario Gotze: a rare illness and unfulfilled potential
5 Decision expected next week on staging of College Football game in August
Real news has value SUBSCRIBE