David Breen back to give Limerick options in attack 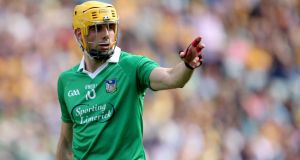 Munster champions Limerick make one change to the team that recorded the county’s first championship defeat of Tipperary in Thurles for 41 years for Sunday’s provincial final. David Breen comes in at corner forward for Seán Tobin.

The big Na Piarsaigh player will be a formidable target and varies the options in attack, as the county aims to win back-to-back titles for the first time since 1981. Manager TJ Ryan has deferred naming his replacements’ bench until closer to throw-in.

Their Cork opponents will be unchanged, which is good news for the dual players Aidan Walsh and Damien Cahalane, who both featured in last weekend’s humiliating defeat by Kerry in the Munster football final. Walsh tweaked a hamstring but is clear to play, as is Cahalane who suffered a minor laceration on his foot in an accident in the dressingroom afterwards.

There was further positive news for manager Jimmy Barry-Murphy when Mark Ellis, who has made a good impression since being brought into the team at centre back, was also declared fit after having to leave the semi-final defeat of Clare with a knee problem in the second half.

Dropping out from the side that beat Roscommon are Tom Cunniffe (injured), Conor O’Shea, whose brother Aidan starts at centre forward with Barry Moran at centrefield, Diarmuid O’Connor and Alan Freeman.

Tipperary manager Eamon O’Shea makes one change to the side that earned him his first championship win last weekend with the win over Galway in Thurles. Ronan Maher, who made his debut last week, drops out with Kieran Bergin replacing him at centrefield. Otherwise Paddy Stapleton retains his place in defence having come in the last day for Conor O’Mahony.

1 Gordon D’Arcy: Change has to happen before Ireland's trip to Paris
2 Out of Bounds: Patrick Reed helping make the ‘C’ word less taboo
3 Kevin Seaward: ‘The first time I wore the Vaporflys, I hated them’
4 Cheltenham keeping a watching brief on coronavirus
5 IRFU not consulted prior to Minister Harris’ recommendation to cancel Ireland v Italy
Real news has value SUBSCRIBE