Cork find the reserves to oust Galway in a thriller 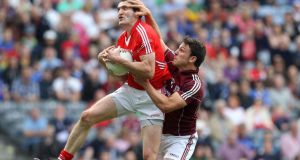 Cork 1-17 Galway 1-16
Saved by experience and muscle memory, Cork immediately lose such advantages for the repeat of the 2010 All-Ireland semi-final against Dublin back at Croke Park next Saturday night.

So much has changed in the meantime. After honing in on Sam Maguire three years ago, Cork are arguably number five in the pecking order now.

“We know, on our day, we are capable of beating any team,” said Walsh afterwards.

They showed this in teasing glimpses. As time ebbed away, the end seemed nigh for Counihan’s six years over Cork. Galway had them by the throat. But they let them go, fading in the rarefied atmosphere of elite championship football.

The aforementioned trio forced the scores that cancelled Galway’s three point lead. They were helped by the arrival and movement of Paddy Kelly, Paudie Kissane, Paul Kerrigan and to a lesser extent Donnacha O’Connor.

The tide didn’t turn until O’Neill’s huge frame thundered through the maroon defence in the 66th minute. His shot smacked off the butt of the post but the veteran midfielder reacted quickest, alley-ooping for Walsh to slap into an empty net and finally beat the brilliant Manus Breathnach.

“Kicking the ball wasn’t working too well during the game so I just said I’ll pat it. I thought I’d hit the crossbar. We needed a goal. We were trying to take our points but they weren’t going over. We pushed on after that.”

Raining scores
That levelled matters at 1-13 to 0-16. Galway crumbled thereafter with Sheehan winning the next kick out and finding O’Neill in acres of space. His point gave Cork the lead for the first time since the 19th minute.

Suddenly it was raining scores into Hill 16 as Goulding, Sheehan and even Michael Shields registered points.

It started so promisingly as Galway took an 0-8 to 0-7 lead at the turn. Cork invited them on, allowing Paul Conroy, Seán Armstrong and Michael Meehan land speculative shots.

Maybe it is the work of referees’ chief Séamus McEnaney coming to fruition, but a number of pointed frees came from David Gough looking past the play. Gough stamped out the jersey clinging in the opening 35 minutes by penalising defenders for holding their men before the ball went in. It was fussy refereeing but attackers profited at either end.

Cork, in fairness, always looked capable of tearing Galway asunder. But Breathnach refused to wilt. He denied Pearse O’Neill in the first half and Mark Collins early in the second both from point blank range. Those heroics prompted Galway to stretch clear, building a five point cushion as Armstrong, Conroy, Meehan and Conor Doherty raised white flags before Michael Martin landed a stunner from the right touchline.

With the exception of Sheehan and Daniel Goulding frees, so many marquee Rebels were anonymous. Counihan introduced Kissane and Kerrigan to kick-start the revival.

Eventually Walsh went on a gallop through the middle and gave Brian Hurley a sight of goal but Breathnach was there again. Counihan sent O’Connor, his All-Ireland winner in 2010, in for Hurley.

Having gone from minute 11 to 53 without a score from play, they had 18 minutes to find salvation.

Counihan was rooted to the sideline. Nothing more to be done. Galway just needed to keep going. Gary Sice understood this, sprinting out of defence to land a sumptuous point that kept a goal between them.

Any GAA person worth their salt would tell you the day Armstrong and Meehan shared 1-10 would herald the end of Galway’s dormancy.

But Cork’s natural born winners refused to wilt. In the game’s last play Galway won a 20 metre free and despite Meehan rocketing to the net, time had run out.

Cork survived. That’s all they did.