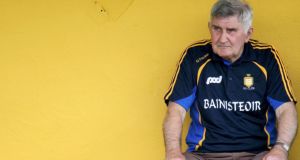 Clare manager Mick O’Dwyer in the dugout during the qualifier game against Laois at Cusack Park in Ennis. Photograph: Ryan Byrne/Inpho

All-Ireland football qualifiers: Clare manager Mick O’Dwyer confirmed that he will step down from the post following his side’s 0-10 to 3-17 loss to Laois in the round two game at Cusack Park in Ennis.

The home side were no match for Justin McNulty’s outfit, who pulled away from Clare either side of half-time with a scoring spree of 2-9 without reply, with the goals coming from John O’Loughlin and David Conway. Ross Munnelly grabbed their third goal late in the game.

Tyrone survived a tight encounter at Dr Hyde Park to beat Roscommon 0-12 to 1-7.

Mickey Harte’s side led 0-12 to 1-2 in the second half, but the scores dried up for the Ulster side as Roscommon came back in to the game.

Two frees from Cathal Cregg and a ’45 from Donie Shine brough Roscommon back to within two points but the home side failed to take their chances late on as Tyrone held on for the win.

Galway just about saw off Waterford in Salthill, winning by just a single point (1-12 to 0-14) thanks to Michael Meehan’s goal seven minutes from time.

Waterford narrowed the gap to just a point through Paul Whyte with a minute to go, but Galway hung on to claim the win.

Derry gained revenge for their Ulster Championship defeat by beating Down 0-13 to 1-5 at Celtic Park.

The sides were level at half-time but Down could only manage one point in the second half and they also had both Brendan McArdle and Kevin McKernan sent off.

1 ‘Magnificent’ Conor Connelly remembered after sudden death
2 Favourite sporting moment? It’s a bit like choosing your favourite child . . .
3 A beautiful, happy accident - Moneyball is the best sports movie ever
4 TV View: Mícheál Ó Muircheartaigh helping us all keep the faith
5 Karen Robinson Walton: I am looking at him. I say ‘Benjamin, what have we done?’
Real news has value SUBSCRIBE

Favourite sporting moment? It’s a bit like choosing your favourite child . . . 01:00
My favourite sporting moment: When Zidane glided through Brazil in 2006 01:00
Angling Notes: Many fisheries have closed for the foreseeable future 00:00
Man City’s Gundogan says Liverpool deserve title if season cancelled 20:32
England and Wales Cricket Board to announce financial aid package for game 19:36
Crossword Get access to over 6,000 interactive crosswords