CJ McGourty hits out at Antrim board after hurling controversy 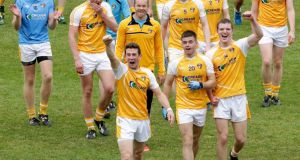 Antrim players celebrate with their fans as they leave the pitch after late comeback win over Laois. Photo: Morgan Treacy/Inpho

Antrim footballer CJ McGourty has hit out at GAA officials in the county, after he and his brother Kieran, along with Conor Burke, were axed from the county line-up for their win over Laois, after featuring in a club hurling game on Friday night.

The trio were only made aware that they had been dropped while on the bus to Saturday’s game.

Both McGourty’s and Burke were needed to make up the numbers for their club St Galls, with 17 players togging out for league relegation battle with Clooney Gaels. “It left us in a bit of a position as the county board wouldn’t call the game off,” McGourty said.

Call the game off “We tried to get it off. The club secretary and the county manager were liaising with everyone, but the county board just wouldn’t call the game off. It was a relegation battle and we had to play – it was as simple as that. We had 17 players, and two of them were minors and we won by two points.”

McGourty says that St Galls club members will be meeting in the coming days to decide on their next course of action, with other club members having been forced to choose between club and county in recent days, including minor footballer CJ McKenna.

“During the week the under-21 hurling semi-final was meant to be on, and it was asking boys like Conor Burke, who is also on the Antrim senior football team, but didn’t start against Laois, to play five games in seven days.

“That’s shocking for the Antrim county board to go and do that,” he said.

“I don’t want to go into too much depth about it. It was a good result for Antrim against Laois, a very good result, but at the end of the day there are things that aren’t right in the county.

“Asking boys to play two games in 15 hours is absolutely ridiculous. It cost the Antrim senior football management three players as well. It put our club in a bad position, so these things are going to have to be looked into.

“At the end of the day Antrim won and it’s a good day for Antrim football, but for the three boys, it’s extremely disappointing.”

At half-time Laois held a six point advantage 1-8 to 0-5 their goal coming from the boot of Paul Kingston 10 minutes before the interval. Laois’ six point lead would then become nine points and it looked as if the game would peter out. Antrim though were reading from a very different script.

Final outcome Ross Munnelly missed a penalty on 40 minutes, although at that stage it did not look like having too much of a bearing on the game’s final outcome.

From there it all began to unravel for the home team as Antrim kicked the next four points, two from Ryan Murray, one from full-forward Owen Gallagher, and in the 42nd minute Murray was again the man on target. This time he raised a green flag and the margin was down to just a point. Laois had a mini-revival of sorts but Antrim continued to grow in confidence. With four minutes remaining substitute Dermot McAleese soloed past the Laois defence and hammered a goal from close range to give the visitors the lead and in a frantic few minutes Pat McBride added another point to put Antrim two points ahead.

Then after an off the ball incident Quigley received a red card, the frustration getting the better off him and that was that.

Antrim celebrated a famous victory in the first meeting between the sides, for Laois their year is over.