Skerries Harps blown away in the second half at Parnell Park, losing by 10 points 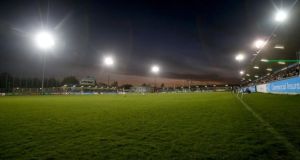 Castleknock had too much for Skerries Harps at Parnell Park. Photograph: Inpho

Castleknock qualified for their first ever Dublin Senior Football Championship semi-final when accounting for Skerries Harps by ten points at Parnell Park.

Castleknock started brightly and were rewarded for their efforts thanks to early scores from Mikey Galvin, Des Carlos and Shane Boland.

Skerries struggled for fluency initially but they kept in contention through a brace of Stephen Smith frees however they suffered a massive blow in the 18th minute as Boland netted from ten yards after a superb break from centre-back Graham Hannigan.

Carlos added to Castleknock’s lead with a brace of frees but with Smith hugely economical in front of goal, Harps enjoyed a purple patch with successive scores from Colin Daly and Graham Cullen reducing their arrears to a point.

The second-half was a far more one-sided affair with Castleknock extending their lead through Carlos and the highly influential Boland.

Any hopes that the contest would remain similarly tight were quickly dispelled as Castleknock increased their lead through points from Carlos and Ciaran Kilkenny.

The contest was effectively settled in the 47th minute as Galvin found the net from Boland’s pass, with Skerries only managing three points from Smith in reply.