All-Ireland SFC final: O’Sullivan could give Dublin the edge

Kerry must hold middle of defence, while Dublin need to have all six forwards firing 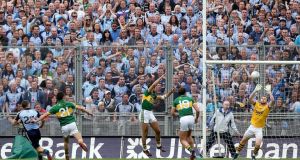 The teams arrive at the big day, trailing different perceived personalities. Kerry, despite an abundance of gifted players, have the reputation of doing what’s necessary and benefiting from a manager who is clear-sighted and decisively backs his own judgment.

This has been seen during the week with a controversial selection that benches the team captain as well as two quality defenders in Marc Ó Sé and Paul Murphy, supposedly because of nagging injuries, but with no official confirmation of that.

Eamonn Fitzmaurice knows what he wants and Fionn Fitzgerald’s superb containment of Ciarán Kilkenny two years ago would be a massive benefit if repeated. Kilkenny though is a bigger, more predatory presence this time.

Marc Ó Sé has had a couple of storied clashes with the in- form Bernard Brogan, but acclaimed duels between corner backs and corner forwards rarely suit the defender – as Keith Higgins would testify after his “great tussle” with James O’Donoghue last year.

Dublin, despite the equivalent of a CSI unit going through how they went wrong last year, are a high-wire act. Lose confidence or conceive doubts as to their karma and they look stricken. They generally don’t win without bravura flourishes: the Mayo semi-final turned in a couple of minutes – the length of time it took Dublin to go from bumbling imprecision to show-time.

Jim Gavin has had his own selection conundrum, with Cian O’Sullivan’s hamstring hanging like a black cloud over preparations. We may not know until throw-in whether he’s going to play or not and his presence or absence will be of huge significance to the outcome.

O’Sullivan is integral to Dublin’s amended defensive system. He’s an excellent defender and uses that instinct to follow the danger. He’s highly disciplined about when to go and generally stays.

He patrols a central area in front of the full-back line and because of serious pace, is able to get to where he needs to be on opposition attacks. In the Mayo replay he had 21 possessions.

I’m sure there’s a plan B, but implementing it requires pace, perception and secure, defensive instincts. That’s a tall order for any understudy.

There will be an added dimension to the demands this weekend, as Jack McCaffrey and James McCarthy push forward as well. There is a school of thought in Kerry that if Dublin’s wing backs get caught in no man’s land, the team will pay a high price, but there has been no evidence of any such residual cavalier instincts this year.

Colm Cooper has been improving incrementally since the quarter-final, but will he be any more devastating than in the first half of the 2013 semi-final? James O’Donoghue looks lively as ever, but without the daunting scoring returns. Paul Geaney’s call-up in place of captain Kieran Donaghy, though, is justified by his semi-final display alone.

Kerry’s 18 points against Tyrone’s defence looked impressive, but even amidst the ruins of their 2014 campaign Dublin managed 0-17 against the Donegal master blanket, so there is scoring power on both sides even in adversity.

The Leinster champions have, however, defended their goal well, apart from the late fiasco against Fermanagh.

Kerry’s more obvious advantage is at centrefield where David Moran and Anthony Maher are expected to rule the skies. Kerry have a good record on Stephen Cluxton’s kick-outs and may well be emboldened by the creaking of the those restarts in the drawn semi-final, but Mayo’s centrefield is probably the best after Kerry’s and Dublin eventually got on top.

Brian Fenton has been a great acquisition. He has learned fast and brings mobility and energy to the middle, while Michael Darragh Macauley showed more of his old self two weeks ago in terms of the strength and dynamism of his running that has troubled Kerry in the past. In other words this may not turn into a fully- fledged disaster area for Dublin.

Remember Jim Gavin’s team won the semi-final with neither Paul Flynn nor Diarmuid Connolly mapped. They won’t survive that outage again, but the view here is that they probably won’t have to.

There is so little in this match that it will be influenced by small things. The total absence of O’Sullivan would not be a small thing, but accepting that he’s likely to play some role, what slight differentials remain favour Dublin.