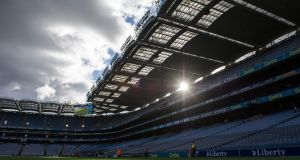 The GAA may opt to show Ireland versus France on their big screen on Sunday. Photograph: Inpho

The GAA are to screen the second half of Ireland v France on the big screens at Croke Park. The turnstiles will open at 2.45pm, with the second half from Lyon due to start shortly after 3pm.

Leinster officials reacted quickly to Robbie Brady’s match winning goal against Italy on Wednesday night by agreeing with RTÉ 1 to move throw-ins to 4.15pm and 6.35pm for Dublin and Meath to avoid a schedule clash with the Ireland kick-off at 2pm (Live on RTÉ 2).

“I think it was a very wise and smart decision by the Leinster Council,” said Dublin manager Jim Gavin.

If extra-time is needed in Lyon the games can still overlap. That may require RTÉ 1 and the Leinster Council to further stall the beginning of their semi-finals.

“Irish people are passionate about their sport and there’s massive interest in the European Championships and it will be a great buzz now on Sunday,” Gavin continued.

“Fans from all four counties now will be talking about that game and the individual games that they have, so I think it’s a great decision by the Leinster Council and it doesn’t inconvenience us at all.

Gavin also confirmed that Paddy Andrews is fully training, after a back complaint, and available for selection.