GAA Statistics: number of players availing of US option for summer in decline 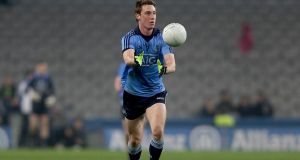 Dublin’s Kevin Nolan: the former All Star decided to spend his summer in the United Stares. Photograph: Donall Farmer/Inpho

Every day it seems we’re reading about the latest batch of young, talented GAA players heading over to the US, but believe it or not there have been far fewer players making the journey so far this summer than in any of the previous three.

With 18 days remaining for player sanctions to the US, via either the North American County Board, the New York equivalent, or the GAA’s J1 sanction, there have been been 305 fewer players departing Ireland so far this summer than in 2013.

With 12 per cent of players over the past three years making their way over in July, the vast majority (36 per cent) travel over in June, it’s unlikely that this year’s total will reach or surpass that of any of the past three years. The lowest of such being last summer when the 2013 spike of 965 players fell back down to 776. In 2012 there were 830 players sanctioned to play Gaelic games in the US, this summer there are just 660.

So far this summer we’ve had hurling and football All Stars like Dublin’s Kevin Nolan, Clare hurler Colm Galvin (since returned) or former Donegal defender Kevin Cassidy, depart to ply their trade in the US.

That’s not to mention the likes of International Rules players Brendan Murphy, Leitrim’s Emlyn Mulligan or Laois footballer John O’Loughlin. No doubt there has been a substantial drain of county players in 2015, even if the overall figures are dropping.

Only this week Longford’s experienced defender Enda Williams set off for New York, but he be will be one of just 44 GAA players to have done so this summer. At this point last year, the start of July, 81 players had made the switch, 102 had done so the year before and 84 back in 2012. 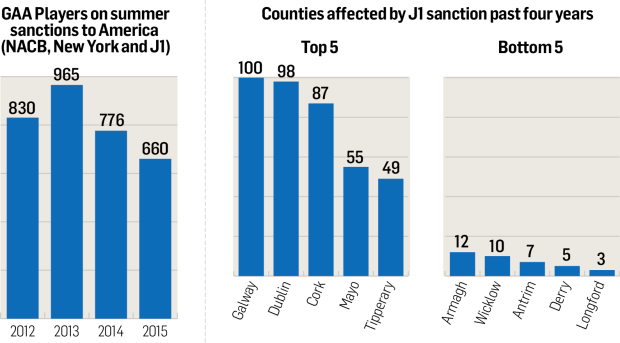 As well as being sanctioned through the NACB or the New York County Board, Irish students can also receive J1 sanctions allowing them to play for their chosen club during their stay in the summer.

Over a third of the total players since the start of 2012 who have played for American clubs through J1 sanctions have arrived from just five counties – Galway, Dublin, Cork, Mayo and Tipperary.

In Longford only three players have received J1 sanctions in four summers, with little more in counties such as Armagh, Derry, Wicklow or Sligo.

In fact since 2012, 12 per cent of players who have had their sanctions successfully accepted by the NACB and New York County Board have come from Galway alone. In 2012 there were 50 Galway players who played football and hurling in American clubs, not even including New York. Interestingly that was the year between their Under-21 All-Ireland triumphs in 2011 and 2013.

The only counties that are losing nearly the same quantity of players to the US outside of J1 sanctions are Kerry and Dublin. There’s been 208 non-J1 Galway players playing football and hurling in the US since the start of 2012, 182 Kerry players,160 Dublin payers, and interestingly in that same period 79 Kilkenny players.

Bigger counties or the counties with perhaps the larger playing pools to select from can afford to lose, and for their clubs to lose, more players.

So far this summer for example Sligo have lost only four footballers to the US, Carlow have lost just two hurlers and three footballers. One of them though is their county’s best footballer Brendan Murphy.

But overall, a large number of counties aren’t in fact being hit that badly, while indigenous GAA clubs in general will be happy to know that the high number of players leaving for the summer months is on the decline.

Connacht continue player hunt as six academy graduates promoted 16:41
Forever In Dreams leads big names for return of racing at Naas 16:21
Second division clash to get the ball rolling in Spain after three-month pause 16:20
Bundesliga will take no action against players supporting George Floyd protests 15:41
Son raring to go after completing military service in North Korea 15:40
Here is your handy guide to sport on television this week