GAA Statistics: Just how important is a half-time lead? 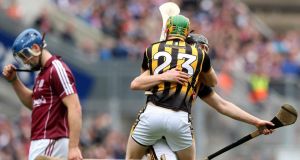 Galway became only the third team in this year’s hurling championship to surrender a half-time lead when their three-point advantage was flipped to an eventual four-point deficit in last Sunday’s All-Ireland decider.

The Tribesmen fell prey to a Kilkenny team who had led at half-time in their previous three games this summer, aggregating a combined total of 5-25 before the change-of-ends. Those three games were part of the 22 hurling, and 69 hurling and football games combined in the 2015 championship in which the team who led at half-time went on to win.

That equated to a 79 per cent conversion of half-time leads-to-wins in the hurling championship, 76 per cent in the football championship and 77 per cent with the two codes combined.

Galway will feel particularly unfortunate to have fallen into that 11 per cent grouping on the biggest day of the hurling calendar, having been in the ascendency against a team who has one major thread tying up their four championship losses over the past five years – they were losing at the interval in all four of them.

While two teams had surrendered leads during the preliminary round-robin stage of the hurling championship, in the “championship for real” it was just Dublin and Limerick before Galway who had let their first half advantages slip. Dublin did so against Waterford, and before that Limerick did against Dublin.

There’s no doubting Kilkenny were in trouble last Sunday, the Cats had already trailed at the break and subsequently lost four of their six league games this year and they had created only 13 scoring chances in the opening 35 minutes.

Yet Galway’s match total of 12 wides (to Kilkenny’s five) caught up with them, and their inability to close out the game meant they were ultimately dispatched with ease, much like their Connacht counterparts Mayo in the football semi-final a day earlier.

Last Saturday Mayo were in a similarly commanding position against Dublin, four points up quite early in the second half, only to lose by seven. Yet at half-time in this one the teams were level, with Mayo left to rue their missed chances.

In only nine of the 62 football games played so far has a team actually lost after securing an interval lead, in 47 of them games the team went on to win and in six (Mayo v Dublin included) the end result was a draw or the teams had been level at half-time.

In fact this was the first time Dublin hadn’t led at the interval all summer, having been three up in the drawn game. So for Mayo the opportunity was there to go on and capitalise – the only two teams to have beaten Dublin in the championship since their All-Ireland win in 2011 did so after leading at the break (Donegal in 2014 and Mayo 2012).

While Dublin’s half-time aggregate may be rock solid, six of the nine teams who surrendered interval leads this summer did come from within their province – with Connacht, Ulster and Munster counties each having just the one team who coughed up their lead. Five of the nine turnarounds came via the qualifiers, and it was the home side who lost their advantage for four of the nine (three neutral venues).

The old adage has proven true this year for sure – in only three of the summer’s football games has a side scored less goals than their opposition and gone on to win the game, in 20 games the number of goals scored has been the same for both teams and in 39 games the team who scored the most goals went on to win. So therefore in 93 per cent of games in which the number of goals scored differed, the team who scored more goals went on to win the game. In the hurling championship teams with less goals won on only three occasions.

Last weekend’s two games brought a new level of excitement to this year’s championship and for sure it wasn’t all about the goals – as the Connacht counties travelled in numbers dreaming of an end to the province’s 14 year wait for a men’s senior intercounty title in either code.

The double-failing though means the gap between any such All-Ireland triumph is now the longest in the province’s history. If either the Galway hurlers or any of the Connacht football teams can close that gap next year, it’ll be 15 years since Galway brought back Sam Maguire in 2001, a year longer than the wait between the county’s football triumph of ’66 and the hurling victory of 1980. The second longest drought, nine years, had been been back in the 1920s – so is it any wonder Connacht is so hungry for success?

At least next year they’ll know to build on their strong opening halves and score more goals, for starters.