Watching the Morans, Ogie and David, last Saturday offered a moment to gladden the heart 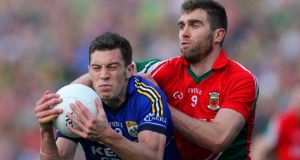 To any young footballer or hurler growing up in the 1990s, there was a ritual that you just craved to be a part of; something you’d probably seen happen to a club-mate, or a class-mate, or a friend of your older brother maybe.

It was, of course, to have his name mentioned in the commentary of an All-Ireland minor semi-final or final by Mícheál Ó Sé.

To those of us with little more than basic Irish (and that includes me, despite a gaeilgeoir for a father), the commentary consisted of some key phrases – “ar dheis agus ar fóraoil”, “scor den chéad scoth”, and of course, the big one – “mhac do...”

In that last phrase was contained a multitude. He was the son of someone. Someone you’d heard of. So more often than not, that was a former player. Ah! You’d say. One to look out for. And suddenly he would be the man you’d focus on. O Se would say it with metronomic regularity, as if to reinforce the lad’s pedigree.

Not possessed of a golden lineage like that, I took solace in the fact that if I ever made it to Croker for the curtain-raiser, my uncle Jim Carney might get a mention, if for no other reason than in a show of RTE solidarity.

And if Mícheál should have mentioned as gaeilge that I appeared to be sadly lacking in the sort of devastating good looks and gravity-defying coiffure that had propelled my mother’s brother to fame and fortune on the national broadcaster, I probably wouldn’t have been able to understand him anyway.

Of course this idea of the minor grade as a kind of debutant’s ball, a coming-of-age party, for the next generation of thoroughbreds from the stud farms of Kerry, Kilkenny and Cork could be seen as an intolerable weight for these kids to bear; but even by the time they’re old enough to shave, they know in their marrow what it is to be compared to their forebears.

They will have felt the simple joy of practicing in the back yard with their dad perhaps. Then they’ll go down to the local pitch, where the locals will investigate to see if he has ‘the knack’, and a quiet hum of satisfaction will go around the village as it becomes clear that the next generation of footballers is safe. He’s a good one, they’ll say.

But of course it’s not enough to be a good one. Can he be better than those who came before him? Is it a failure when you realise that he’s not? Some kids will walk away from it and discover life without the GAA is a far less-complicated place – others will exceed even their grand lineage.

And there are others onwhom the pressure never truly lifts. David Moran looked destined to be in that third category, a player who would always struggle with the long shadow cast by a father who, in his case, won a scarcely-credible eight All-Ireland medals. How do you compete with that?

It may be hard to believe given the quality of his display on Saturday night, but that was the first time he had started back-to-back senior championship games for Kerry.

For a man who made his debut in 2008, with that pedigree, with all the physical gifts, all the natural ability in the world, that’s an awful long time to wait.

In the midst of all the post-match stupidity on Saturday night in Limerick, the TV cameras caught the moment when son met father on the pitch. It wasn’t mentioned by the commentators on either channel, given all the other nonsense that was going on, but what a moment that must have been.

It was the sort of performance to lift the doubts and justify all the heartache of two cruciate knee injuries, all the knock-backs and all the question-marks.

Some journalist friends of mine were down in Killarney covering the Irish Open in 2011 and enjoyed the company of David and his father for a pint, while David was recovering from the first of those cruciate knee injuries. It was clear then, as it was clear on Saturday night, that they share a great relationship.

Sport is littered with parents living vicariously through their sons – this wasn’t anything like that. That moment, to me, was the relief of a parent who sees their child gets the reward he deserves. When that happens, that must be a tough feeling to beat, even for a man with eight All-Ireland medals.

1 Born to ride, born to win: Sam Bennett, the making of a green machine
2 Leinster look ready to step things up and burn off Saracens challenge
3 Will 'Porridge' Connors now delivering on his massive potential
4 Let’s face it, Saracens don’t really care that they are rugby’s most hated team
5 Rory McIlroy battles to stay in mix as Patrick Reed leads US Open
Real news has value SUBSCRIBE