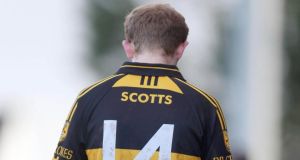 As if the news couldn’t get any worse for Kerry football it has now emerged that Colm “Gooch” Cooper has also sustained a fracturing of his knee as well as rupturing his anterior cruciate ligament– thus requiring “stages of surgery” and an even longer process of rehabilitation.

Suddenly, a season-ending injury may well run the risk of being career-ending, depending on how well that process of rehabilitation goes. Cooper turns 31 in June, and is now unlikely to return to match fitness until well into 2015, or close to his 32nd birthday.

But the eight-time Kerry All Star in good hands – being looked after by Dr Ray Moran at the Sports Surgery Clinic in Santry. Moran has over 20 years experience in anterior cruciate ligament (ACL) surgery, and will work closely with Cooper throughout the rehabilitation process.

More complex
However, Moran must first address the fracturing of Cooper’s knee, on the same right side as the ACL rupture – thus making for a more complex procedure that a mere ACL repair. Cooper will travel to Santry on Friday for surgery on the fracture, which Moran described as a “fixation” procedure, which then must heal before he can carry out the surgery on the ACL.

It will make for a far more lengthy healing process than originally envisioned with a just an ACL repair, which typically takes around nine months. The sooner the ACL surgery is carried out the sooner that rehabilitation process can begin, although in Cooper’s case it could be several more weeks before that process even begins.

While all this shouldn’t impact on the prospects of a successful outcome, it will make for an even longer absence from the game, at both club at county level. There was some initial speculation that Cooper might return in time for the club championship later this year, particularly if his club, Dr Crokes, went on to win a fifth Kerry title, and with that progress into the Munster championship.

Instead all that seems a very long way off, as indeed does the day when Cooper will get back onto the field of play.

And all this on the back of what appeared to be no more than just an awkward challenge early on in Saturday’s All-Ireland club semi-final against Castlebar Mitchels.

Now, with the requirement for stages of surgery, as Moran described, there can be no definitive return date.

While Cooper was left to come to terms with the disappointment of losing a third successive All-Ireland semi-final, Kerry have lost both their captain and most influential player for the 2014 championship.

The news prompted several bookmakers to stretch the odds on Kerry winning the All-Ireland from 6/1 to 9/1.

It has also emerged that AIB’s sponsorship campaign for the All-Ireland club championship – which features Cooper as one of their football ambassadors – is “under review”, given both the timing and full extent of his injury.

Extremely unfortunate
Cooper has been the face of the current football sponsorship – which presents the club championship as “the toughest” title to win. Print and television ads have been running throughout the campaign, highlighting the fact that Cooper has won four All-Ireland titles with Kerry, and eight All Stars, but has yet to win an All-Ireland club title.

“The timing was extremely unfortunate,” according to a spokesperson for Wilson Hartnell, who manage the AIB club championship sponsorship.

“Colm Cooper is an AIB employee, and has always had a very close relationship with this ad campaign. Obviously there was no way of knowing things would turn out like this.

“But there will be a meeting over the next few days to review the schedule . . .”

AIB are also using ex-Tipperary All-Ireland-winning hurler Brendan Cummins as part of their current club championship ad campaign, and it’s likely that ad will get more airing in the run up to the All-Ireland club finals.

1 Solskjær praises Martial for building himself into ‘powerhouse’ centre forward
2 No final round heroics for Rory McIlroy at US PGA
3 Ronnie O’Sullivan beats Ding to reach Crucible last eight
4 Sporting Cathedrals: Cheltenham reveals all about the wonder of racing
5 Tyrone’s McShane ruled out for rest of the season
Real news has value SUBSCRIBE