Dominant Dublin must be wary of the pitfalls of summer 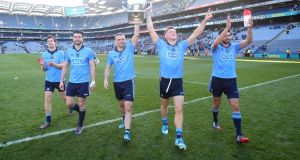 at the weekend and it places them three-quarters of the way towards the first back-to-back league and championship double in 82 years.

The win over Derry produced the biggest score, 3-19, put up in a league final since Kerry’s 4-16 in 1961 – also against Derry – which had the added merit of being produced in a 60-minute match.

Derry are a team in a development and not considered likely challengers for the Sam Maguire but Dublin’s display sent out a message and bookies have even opened books on the All-Ireland without the champions.

That much says a great deal about the achievement of Jim Gavin’s team but the remainder of the context isn’t as straightforward. Cork got this far three years ago before putting in a wearied championship campaign that ended in defeat at the All-Ireland quarter-final stage, which, since its introduction 13 years ago, has proved the destination of choice for defending champions.

Panel strength
If fatigue isn’t to be a problem for Dublin because of their panel strength and the fact that a number of key players made very few appearances during the spring, what are the dangers that lie ahead for the team, seeking to retain an All-Ireland for the county for the first time in 37 years?

Jack O’Connor, who led Kerry to three league-and-championship doubles (2004, ’06 and ’09) in the last decade identifies a couple of issues for them.

“The first thing to say is that Derry malfunctioned badly. They seemed overawed by the occasion and the growing reputation of Dublin. They had a lot of players who’d done well in the league – I saw Mark Lynch in particular and Enda Lynn in Killarney when they beat Kerry – but they were like rabbits in the headlights.”

O’Connor believes his own county showed in last year’s great All-Ireland semi-final that the best way to take on Dublin is to take them on. Derry however were conservative and pulled men back, in the process conceding a lot of territory to the holders.

“They do leave a lot of space at the back and that surprised me at the weekend because there’s no need. Derry had extra men in defence and whoever was marking them could have dropped back.

“Derry weren’t able to get quality ball into their two full forwards but they didn’t put the Dublin half backs under pressure either. This was something Kerry really exposed last year in the first half of the All-Ireland semi-final but at the weekend Jonny Cooper spent the whole day on the front foot.

“That’s a mistake because sitting back off them isn’t the answer – their half backs are so comfortable coming forward – but they are vulnerable under pressure. Donncha Walsh made some tremendous runs last year but then again Kerry had the Gooch supplying them that day.”

The loss of Colm Cooper will weaken Kerry’s hand this summer but the principle of exerting pressure on Dublin’s defence remains sound.

“They’re very athletic and are overrunning teams and also have some of the best players in the country in key positions: Stephen Cluxton, Paul Flynn, Bernard Brogan, Michael Darragh Macauley and Cian O’Sullivan although he’s probably more of a natural at centre back.

Much good
“The biggest problem for Dublin at the moment is trying to keep the lid on expectations so the match probably didn’t do them much good. A big win like that is good as a morale-booster but they don’t really need to have their morale boosted.”

O’Connor also feels teams need to be stress-tested for the championship. “For the purposes of winning an All-Ireland I’d rather be scraping through matches. In ’09 we struggled through a couple of qualifiers but when we got to Croke Park we were primed and ready for anything.”

A year ago Dublin had to scramble hard to catch Tyrone in the league final, having lost to them in the regulation series. This year’s retention of the title has seen the winners take off from the 37th minute of their semi-final against Cork.

Since then they have outscored their opponents – Cork and Derry were also the only sides to defeat Dublin in the divisional matches – over the remaining 100 minutes or so by 5-32 to 1-12.

Unlike Kerry, Dublin don’t have All-Ireland contenders like Cork in their provincial championship. They can claim a Leinster title without having been fully tested. “There’s always a chance Dublin could get caught in the All-Ireland quarter-final,” says O’Connor, “but they have a ferocious self-confidence so it wouldn’t be easy.”