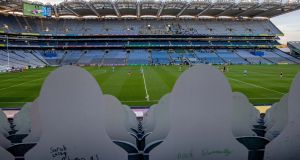 The GAA’s return to play has been suspended indefinitely and to April at the earliest. Photograph: Inpho

The Government decision to withdraw the Level 5 exemption for Gaelic games was taken without any input from the National Public Health Emergency Team (Nphet), according to Minister of State for Sport, Jack Chambers.

Speaking on RTÉ Radio 1’s Today with Claire Byrne,  he was asked what advice had been received in respect of the decision to strip Gaelic games of the exemption.

“I haven’t had any communication from Nphet on this. It’s just to say it’s a case of giving a direct answer to whether there’s a current concession for intercounty GAA.”

The Gaelic games associations were able to run their senior intercounty championships last winter because the sports were granted an exemption from Level 5, along with other elite sports.

According to the minister, there had been no change of heart on the exemption from Level 5 restrictions; they had simply expired. He did echo earlier statements by Taoiseach Micheál Martin on the same station’s ‘Morning Ireland’ that the matter would be reviewed.

“There was no change. The concession concluded at the end of last year. You’ve got to look at the background context of January when we’ve had more cases than in the whole of last year.

The concept of exemptions as licences, to be applied for, is new. Last October before the intercounty season resumed, the GAA assumed that it would not be categorised among the elite sports’ exemptions after statements from senior ministers, Leo Varadkar and Michael McGrath that intercounty championships would not be green-lighted.

It was an intervention from Nphet that changed that and cleared the way for a resumption of Gaelic games, making it interesting that the current decision was reached with no input from the advisory body.

Croke Park heard nothing from Government when it published its schedule for 2021 before last Christmas, indicating an intention to resume intercounty training in mid-January. That deadline was suspended in light of the huge rise in Covid cases and in the context of continuing social restrictions, such as the schools being closed.

It was in the wake of the letter to counties last week, updating them on plans for a return to play that the GAA was first informed that its exemption had been revoked.

As the minister observed in his interview, though, there hadn’t been any “great appetite” on the part of Croke Park to signal a return to training, any prospect of which the GAA’s Covid Advisory Group had described as “irresponsible”.

He was also asked about why the League of Ireland, which is not a full-time league, was proceeding with its return in March but Gaelic games weren’t being permitted.

“In the roadmap that was published last autumn, we gave exemptions for professional sports. For example, the League of Ireland is a professional league. That is the distinction.”

He went on to say:

“The GAA, the LGFA and the Camogie Association were contacted last October to say that the concession that existed outside of the framework approved by Government was to have the intercounty championships and that concluded in December.

“The GAA didn’t request a concession in January or February when we met them. In fact they were clear that there wasn’t a massive appetite to return in the immediate term. That’s the background context and I want to see the broader return of intercounty . . . and we’ll be trying to revise that and provide certainty in the updated plan at the end of the month.”

The Government is due to publish an update to its ‘Living with Covid’ document in the last week of February. In the earlier interview, Taoiseach Micheál Martin had flagged that the matter was under review.

“With the revising of the plan, we’ll look at sport and intercounty GAA,” he said. “I thought it worked well last year but it was always timed to end at the end of the year and so we’ll look at it afresh.

“Of course there’s still a chance. Intercounty sport made a difference, both in soccer (domestic) and GAA. There’s a balance here in terms of mental health and quality of life. We want to keep activity levels going in society more generally in terms of mobility and in terms of the potential for the spread of the disease.”

He cited recent developments in the coronavirus pandemic that have seen positivity rates among close contacts have doubled and new variants. Asked did that mean that Gaelic games would be waiting on further reduction of case numbers, he said:

“Yes but we’ll also be looking at it in the context of the plan that has been revisited and looking at sport more generally.”

Association director of communications Alan Milton, on the same programme, expressed disappointment with the decision.

“I’m not sure that it was a surprise but it was a disappointment because we’re staring into a long period of inactivity but it’s obvious to everybody that the exemption we received at the end of last winter to proceed with the championships was exactly that: an exemption.

“While it was welcome and the championships went off really well, I think the Government are dealing with a different scenario at the moment in terms of different strains and the rates out there. It’s a disappointment, yes, but we’re going to have to knuckle down and show some of the flexibility we showed in 2020, facing into 2021.”

He said that he hoped the revised Government plan would give some guidance but said the association wasn’t expecting specific timelines.

“We mentioned it in the correspondence to our clubs and counties last night that we’re waiting for the publication of the tweaked ‘Living with Covid’ document next week but I don’t think it will give absolutes in terms of dates and timelines. It may give us some insights into what might be possible.

“I think it’s important that we don’t just focus on the intercounty game here. There are hundreds and thousands of club players out there, not to mention the young players who are outschooling at the moment so anything we might be able to do to get back in a non-contact - even in pods - situation would be hugely welcome for society and not just the GAA.

“The GAA has tried to play its part from day one and will continue to liaise with Government and we’ll take their lead but I think we’ve got to get as creative as we got last year when it comes to scenario planning to ensure we make the best of 2021 and we’re adamant that we’ll do our utmost to do exactly that.”