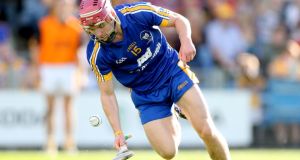 Clare footballers may now avail of Davy O’Halloran after he was dropped by the hurlers. Photograph: James Crombie/Inpho

The Clare footballers may yet avail of a fourth All-Ireland winning hurler this year following Davy O’Halloran’s exit from the county’s hurling squad.

O’Halloran has left Davy Fitzgerald’s senior hurling panel along with fellow 2013 All-Ireland medallist Nicky O’Connell after a disciplinary breach, as revealed by the The Irish Times on Friday morning.

Already this year the Clare footballers have attained the services of Podge and Sean Collins as well as Cathal McInerney from the grasps of the hurling squad.

O’Halloran is also a talented footballer and Clare football manager Colm Collins has revealed that he was contacted at the start of the season with an option to joining his panel.

The Eire Og club man though opted to stick with the hurlers. He scored 1-4 in the Under-21 All-Ireland final two years ago and was consequentially drafted into the senior panel along with Shane O’Donnell.

He had started in all of the team’s Waterford Crystal Cup games this year but had not featured in the league whatsoever, to his supposed digruntlement.

Collins says that following his renewed availability the door remains open to the possibility of O’Halloran joining the ranks of the footballers.

“I never closed the door. He was offered a position on the panel at the start. In a county like Clare, there are so few clubs, it’s important to never close the door and if he would be interested we’d speak to him.”

O’Halloran was a standout performer for his club in their county final defeat to Collins’s Cratloe club last October. He scored two points from centre forward.

“I know Davy well,” says Collins whose team lie in fourth place in Division Three of the Allianz League, “he’s an excellent footballer and a lovely lad. I’m sure I’ll bump into him soon.

“It’s not the time of year we would be focusing on that kind of thing though, games are coming hard and fast, so time is totally taken up with that.

“But we will stick with what we have for the league I would say and their might then be a few changes after it. The Under 21s were very impressive during the week too.

“Out of respect to the lads who have put in massive effort though we’ll stick with them for the league and we’ll see after that.”