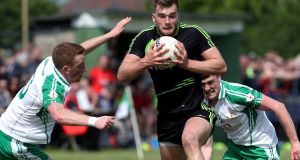 Aidan O’Shea has denied that Mayo are running out of steam after five years in contention for the All-Ireland. The current All Star was speaking after the weekend’s defeat by Galway in Castlebar – the county’s first in Connacht for six years.

The county was also chasing a record sixth provincial title in a row and must now proceed to the qualifiers. O’Shea was asked had the last five seasons, featuring two All-Ireland finals and five semi-finals including two replays, taken its toll .

“We weren’t playing particularly well but we were doing enough to be ahead and then I think just a few poor errors, a costly free and obviously the goal just swung the momentum. We couldn’t wrangle it back, which was disappointing because there was loads of time at that stage.

“I’ve never lost to Galway in a competitive game, minor, under-21, senior, so yeah, definitely a change and definitely didn’t see it coming. A disappointing loss, obviously not the ideal situation to be in but it is what it is now.”

O’Shea said that the prospect of creating a record in the province had driven him and also addressed the issue of the Mayo players’ revolt last autumn, which saw the enforced departure of last year’s management team of Noel Connelly and Pat Holmes despite winning Connacht and losing an All-Ireland semi-final replay to eventual champions Dublin.

The defeat was a shock, as Galway were 4/1 outsiders and there was widespread pessimism within the county about their prospects. It was suggested to O’Shea that Mayo’s opponents had been better than given credit for. He appeared uncertain.

“I don’t know. We’ll have to wait and see. It was only a Connacht semi-final. I know it’s a big win for them but there’s a Connacht final to play yet. We’ll wait and see how the summer progresses.”

He was, however, sceptical about former manager James Horan’s claim last week that the gap between Mayo and the rest of the province had been growing.

Aidan O’Shea was speaking at the launch of Kellogg’s Powering Play, an initiative aimed at introducing children to the concept of good nutrition.