Both players are expected to excel in the ball handling tests, like Paddy Brophy last year 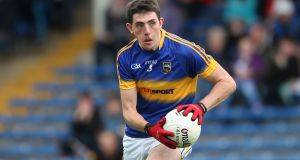 Tipperary’s Colin O’Riordan first impressed as an Under-16 on the Tipperary All-Ireland winning minor team of 2011. Photograph: James Crombie/Inpho

Tipperary and Kilkenny could each have a first AFL rookie if all goes well for Colin O’Riordan and Darragh Joyce at this week’s NAB AFL Draft Combine.

Starting on Thursday over 80 draft prospects, from varying sports and countries, will convene at the Etihad Stadium in Melbourne to “test in front of recruiters and meet clubs in a four-day job interview”(AFL).

Among the key tests the duo will be put through are a 20m sprint, an agility speed test, a jump test (standing vertical jump, running vertical jump), a beep test, a 3km time trial, a handball/clean hands test, a kicking test and a goalkicking test.

Both players are expected to excel in the ball handling tests, much like Kildare’s Paddy Brophy did this time last year in securing himself a contract with West Coast Eagles.

Last year he scored 26 out of 30 to record the joint highest score in ‘the clean hands test’, while he was also joint second in the goalkicking test and among the top scorers in the 20m sprint. His time of 2.93 seconds seen him finish in joint sixth along with Tyrone’s Conor McKenna.

McKenna has already made his debut for the Essendon club after also finishing third in the agility test and seventh in the repeat sprint results 12 months ago.

Both this year’s possible recruits are particularly interesting picks - with both hailing from hurling counties - much like Cork hurler Setanta Ó hAilpín who joined Carlton in 2005.

Joyce is a younger brother of Kilkenny senior centre back Kieran, and has impressed with and captained the Kilkenny minors to All-Ireland glory in 2014. Like a number of current Kilkenny senior panellists such as Walter Walsh or Ger Aylward before him, he plays his football with his school Good Counsel in Wexford.

Joyce has already caught the eye of Hawthorn and the Sydney Swans scouts with his skills and game awareness impressing recruiters during a European draft in DCU last December.

O’Riordan is a more active dual star, while he was a key player for the Tipperary Under-21 hurlers this year he really caught the eye for the county’s footballers who reached the All-Ireland Under-21 decider but ultimately lost to Tyrone.

His performances were rewarded as he was named Under-21 footballer of the year, and he has already cemented his place on the county’s senior football team - but he has made it clear that his intention is to pursue a professional deal down under.

He told reporters last month that “of course you’re going to miss home but you only get this opportunity once. You’d have to go out there with the attitude that you’re setting up for life over there and this is where your future lies.”

1 Ken Early: Handball ‘crisis’ a timely distraction from the grim bigger picture
2 The Offload: Springbok heavyweights heading for Pro14
3 Tour de France: Every yellow jersey winner must feel guilty by some association
4 All in the Game: No sympathy from Bruno Fernandes
5 Liverpool maintain perfect start with win over Arsenal
Real news has value SUBSCRIBE