Ciarán Murphy: The rules won’t change for the GAA 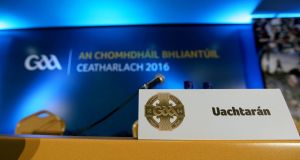 If the lines of communication from club to county board to central council to Congress were working, there wouldn’t be any need for a Club Players Association. Photograph: Donall Farmer/Inpho

As a man who enjoys all the meats of the sporting stew, I was at the Ireland v New Zealand game last weekend with my father, who hadn’t been to Lansdowne Road since it became the Aviva Stadium (sorry, ticketless rugby fans – if it’s any consolation, he’s a great man to watch the Pro 12 on TG4).

As we took our seats in the West Stand, and watched the first, brutal quarter unfold, I suddenly realised I was sitting beside former Galway footballer and manager Alan Mulholland, to whom I remarked that this was nearly as uncompromising as Caherlistrane v Menlough in the final round of the Galway senior football league.

So given my surroundings, perhaps I could be forgiven for watching the game with rather more of a GAA mind-set than usual. And in all the hullabaloo around how it was refereed, it struck me that squeamishness about showing a red card is thankfully not one of the traits our home-grown referees share with their rugby counterparts. If Dickie Murphy had been in charge, our man Fekitoa might well have gotten the ultimate sanction . . . but there was no guarantee we wouldn’t have lost a man ourselves to a red card, “just to even things out”.

In rugby, referees appear happy enough to give players yellow cards, and let the citing commissioners decide whether it deserves further sanction the following week, which is a pretty shocking dereliction of duty on their part. The GAA are obviously pretty fond of a late night disciplinary hearing as well, but at least they’re based on an appeal brought by a player, or on an incident missed by the officials first time around. It’s not passing the buck.

But there is one area where the GAA could certainly learn from rugby – and that’s in how rule changes are brought into force. We have the “mark” coming our way next year, to the bemusement of many, but anyone who has watched it being trialled in third level football would tell you that this is hardly going to turn the Gaelic world upside down.

Whatever its merits, I don’t think we can say with any degree of certainty that we all agree unanimously with the process behind bringing the rule in, or the clear-headedness of the thinking behind it. It’s certainly worth a try, but it’s the ad hoc nature of what rules do and do not make it past the guardians at the gate of Congress that really rankles with people.

In rugby, the Law Representation Group meets every four years. That’s a 14-person panel, who sit down, look at the laws of the game, and make decisions. Last time they met, that included the then-and-now New Zealand head coach Steve Hansen, former internationals Rob Andrew and Chris Paterson, and former referee Joel Jutge.

Fourteen committed, well-informed people, in one room, with a blank canvas. Doesn’t that sound like a rather better idea than how the GAA goes about things? Which is, of course, to get 14 (or some such number) committed, well-informed people together, in one room, let them make recommendations . . . and then have those same 14 people spend six months trying to convince people that it’s the right thing to do, before being shafted at Congress.

I understand that the phrase “ . . . but it’ll never get past Congress” is the GAA equivalent of Father Jack being taught to repeat the phrase “that would be an ecumenical matter” in Father Ted. I’ll continue to try to avoid all mention of the C-word if I can. But sports should constantly be changing their rules. They are living things. Rules can’t be set in stone and taken down from the mountain-top.

At the end of every NFL season in American football, the 32 owners sit down and decide what rules to tinker with for the following year. They decide, rightly or wrongly, and presumably with hefty input from their head coach, what tweaks or changes will make the game better to watch – and then they go right ahead and do it.

We prize very highly the democratic nature of the GAA – how an idea at your local club AGM can make it all the way to a national stage. But that’s not how it’s actually been for years.

The new Club Players Association, set up in recent weeks by former Monaghan selector Declan Brennan, is of course a brilliant idea; but if the lines of communication from club to county board to central council to Congress were working, there wouldn’t be any need for it.

People are bursting with bright ideas on how to move the association forward, but the decision-making process is designed only to ensure that many of those ideas wither on the vine. It’s unfortunate but in the GAA everyone gets to stick their oar in . . . and that usually means the boat just goes around in circles.