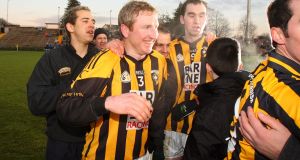 My parents are hoarders. Not on an industrial scale, not in a way that would interest TV producers, but they like to hold onto things.

My brother enjoys throwing things out more than is reasonable in a man. When the civil war comes, there’s a pretty good chance it will be as a result of this rather unfortunate difference of opinion.

A couple of months ago, Paul (as he wont to do) was indulging his passion in my parents’ house, by throwing out some things that did not and never had belonged to him. As my mother hovered uneasily, trying to ensure he didn’t throw out any fixtures and fittings, they discovered a box of match programmes.

In among the National League programmes and the club championship games, of which there were many, was a gem – the 1989 National Féile programme, held in Galway, in which our club Milltown took part, as a host club. July 7th-9th, 1989. Luach – 50p. And there was Paul’s name, listed with all his contemporaries.

Nowadays Féile is a huge event, with divisional champions from every county, and girls teams too of course. Back then, it was just the 32 county champions, and the 32 clubs hosting those champions, who competed.

Paul’s team were pretty handy, having only barely lost the county U-14 final that year to Corofin, and they did okay in the national Féile championship as well, drawing with the Kildare champions Sarsfields. But they were no match for the club we hosted, Thomas Clarkes from Dungannon, Co Tyrone.

And as Paul flicked through the programme, he started recognising names. The first club he went to was Crossmaglen, figuring he might spot a few names he would recognise in there.

Three of the first four names listed were Tony McEntee, Francis Bellew, and John McEntee. Hmmm . . . this could be something. His interest piqued, he went to see who else he could spot. By the time he’d reached the last page, he had picked a team from the competitors.

In one year alone, in 1989, and with a heavy emphasis on Galway lads since there were 32 club teams to choose from, you could pick the following team – Alan Keane (Galway) in goal. A full-back line of Richie Fahy, Francie Bellew and Tomás Meehan.

The half-back line consisted of Tommy Joyce, Declan Meehan and Hank Traynor from Meath (whose club, Simonstown, promised their team would be very well behaved in their notes on the club, next to the team-sheet in the programme – the PRO doth protest too much, methinks).

Every single player had won a senior inter-county All-Ireland with the exception of Ciarán McDonald. Ronan Rocks from Derry, Neil Carew from Sligo, and 1998 All-Ireland winner Shay Walsh were on the bench.

He put it up on Twitter – with the added detail that to avoid any accusation of bias, no Milltown player was considered – and it quickly became clear that the weekend lived very much in the memory of more than just himself.

Lads from Crossmaglen told him that the semi-final defeat their team suffered at the hands of St Finbarr’s from Cork was one of only four defeats that team had in their entire juvenile career. The team would end up providing 12 All-Ireland club champions, and four All-Ireland winners with Armagh. which added up to about 45 All-Ireland medals in total.

An Gaeltacht in Kerry got in touch to say that if Darragh Ó Sé hadn’t been a late withdrawal (because he had gone on a summer course in French, if you can fathom that), and current Rose of Tralee host Daithí Ó Sé hadn’t been injured, they might well have gone on to win the thing, instead of bowing out at the quarter-final stage. Daithí himself got in touch to say he was caught sneaking out of his host house in Corofin at 2am, on crutches.

The announcement this week of John West’s continued sponsorship of the newly expanded Féile will have triggered many such memories for other people I’m sure. Moves have been afoot in recent years to ensure that competing clubs get back to the spirit of its early years, when it really was about establishing links between clubs from different ends of the country, and having some fun with it.

In recent years there have been barely-believable tales of U-14 teams going on warm-weather training camps, or staying in hotels instead of with host clubs.

But the abiding memory for Paul and for his mates in a north Galway village was welcoming 30 people from a town in Tyrone still in the midst of the Troubles. They might as well have been from a different planet. The eye-opener that gave them, and the lessons they learned about people living elsewhere on this island, was more important than any trophy.

**This year the John West Féile na nGael National tournaments will be held in Down, Louth and Meath the weekend of 29th June – 1st July.