Armagh says yes and then says no to media 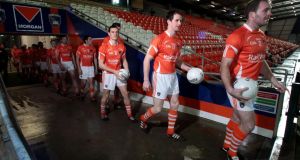 Armagh players taking to the pitch but there has been little sight of them at media conferences recently as they continue to boycott press events.Photograph: ©INPHO/PRESSEYE/Matt Mackey

Armagh continues to say no to all mainstream GAA media - cancelling a scheduled appearance at a lunchtime press conference today ahead of Saturday’s All-Ireland football quarter-final against Donegal.

Croke Park had intervened in Armagh’s refusal to fulfil any general media requests, a decision which stemmed from the punishment handed down for their involvement in the pre-match parade brawl which marred their Ulster quarter-final win over Cavan two months ago, back on June 8th.

Yesterday afternoon, an invitation was issued from “the GAA and Armagh County Board” to attend a media event with Armagh assistant manager, Peter McDonnell and Armagh captain, Ciarán McKeever, at the Carrickdale Hotel, Dundalk, from 1.0pm

However, just after 10 o’clock this morning, Croke Park informed the invited media this event was “postponed”. In the meantime, according to Croke Park, “the GAA at Central Level is endeavouring to ensure that Armagh players and management figures will be available for interview at Croke Park this weekend before and after the county’s All-Ireland quarter-final meeting with Donegal”.

According to Alan Milton, the GAA’s Head of Media Relations, the decision to pull the plug on today’s scheduled event came with some surprise and disappointment.

“We worked with the Armagh county board to put this event in place, and were of the opinion by close of business yesterday that it was going ahead,” he said. “Something obviously changed overnight, because they came back this morning to inform us they were not in a position to fulfil these obligations.

Last week, however, McDonnell did give an interview yesterday to Gaelic Life newspaper, claiming that inaccurate reporting was now the main motivation behind their media ban.

“We would strongly feel that we have been disrespected and dismissed and portrayed inaccurately,” says McDonnell, who previously managed Armagh for two seasons, 2008-09, then came back on board again as assistant manager under current manager Paul Grimley.

“A false impression is created and sought to be created, and not just during this year, but during previous years. And to that end, until resolution is achieved there will be a coolness and, indeed, an absolute and total failure to communicate with certain elements of the media.”

Whether or not this is any direct reference to comments related to that pre-match parade brawl is unclear, although GAA president Liam O’Neill has vehemently denied the inference by Grimley that both he (O’Neill) and director general Páraic Duffy pressurised the Central Competitions Control Committee (CCCC) to suspend players from both Armagh and Cavan.

In the meantime Grimley also broke his silence back on July 1st in a brief interview with the Newry Democrat: “The media did, in my opinion, influence Liam O’Neill and Páraic Duffy and the CCCC and put pressure on them, and they reacted as they normally do. We were standing in an orderly fashion behind the band and we were attacked.”

Grimley was also quoted as saying O’Neill thought Armagh was the “easy target.”