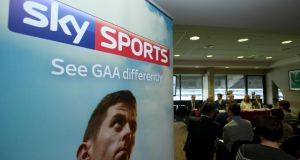 Friday afternoon and Nowlan Park is grey and still. At least on the face of it. The only sound is the crank of a distant drill above in the stand. A few men in yellow jackets go around nipping and tucking the place into shape for the summer’s first championship match and if you didn’t know different, you’d say all was business as usual.

But you do know different. You know that out in the car park behind the Ardán Ó Cearbhaill, three trucks are humming away with a couple of dozen technicians and engineers and operators and assistants inside.

And you know that in a square box above the bottom corner of the pitch, another 20 or so are framing, lighting, trial-and-erroring the temporary studio they’ve been putting up since Wednesday. A day out from their GAA debut, Sky Sports are slapping on the greasepaint.

Brian Carney arrives, hoodie pulled up around his ears on what is a chilly afternoon for early June. Rachel Wyse, Jamesie O’Connor and Ollie Canning are here too, ready for rehearsal. Before they can get started though, director Ciarán Ó hEadhra has a fixture to fulfil.

He has a live link set up from his iPhone to the Sky Ireland headquarters in Dublin where an audience of a few hundred employees is watching as he gives them a guided tour of the operation. O’Connor and Wyse take questions from the floor. “No Joe Brolly ones, please,” she cracks, to much laughter.

Ó hEadhra is a Mayo man who in a former life headed up TV3’s coverage. In a former, former one, he did everything from GAA to F1 at Setanta and if you go far enough back, he was involved with the very first GAA broadcast on TG4.

“It was either a Sigerson match or a club match. I think it was possibly Mount Sion against Doora-Barefield at Fraher Field.”

His co-director is Steve Lawrence, a Sky veteran who has been at the company for over 20 years. When he started, Sky Sports had 30 full-time employees. The road from there to here has taken him through more sports and countries than he can count. Soccer, cricket, horse racing, you name it. Strip it all away and he’d happily pass his life watching greyhound racing.

Ó hEadhra’s production company left TV3’s coverage in 2011 when the obliteration of media budgets that year meant everything was going to be done in-house and he figured he was going to be spending this summer making documentaries.

But when word went around in the spring that Sky looked like they were about to get into the market, he was put on notice. A former executive in Setanta was high enough up in Sky now for his name to be bounced around the place and when the deal was done, his plans for the summer changed in an instant.

“I’m not nervous about being judged to a high standard because high standards are what they’re all about. That’s a given. But am I nervous that people’s perception of us might not be changed? Yeah, I am. There are people who have very strong, steadfast views on how they want Gaelic games to be produced, how they want it to be shown. And I would love to win all of those people over. But you mightn’t be able to do so. And yeah, I’d be nervous about that.”

He knows that even those who wish him well are still waiting with ears cocked for the signature slip-up. Their friends at Sky Sports News have already provided plenty of fodder – see Kilkenny v Offaly in the Connacht Football Championship, see Laytrom, see Sillyan O’Connor. Kinks to be ironed out, no doubt about it. But, he says, small beer in the greater scheme of things.

“There’s been all the hoopla with pronunciation. But in fairness, what got lost there I thought was that that was a Bank Holiday Monday in the UK and there was lot of people watching television on a channel that has a reach of two million people. So there was a lot of people watching those Mayo v New York highlights. I’ve an uncle who was the head of the Gloucester County Board for 20-odd years – he got a huge kick out of seeing them.

“Immediately after it blew up on Twitter, [Sky Sports News] were straight onto us saying, ‘Look, we need the correct pronunciations.’ It wasn’t something that drifted off into the ether. But look, the World Cup is going to be on for the next month and routinely commentators will mispronounce foreign names.

“I understand that this is treated different. I know that and I expect that. But the fact that they were on so quickly going, ‘How do we get this right?’ is good. Look, it’s an adjustment for these people. They’ve grown up watching other sports and I don’t imagine they treat, say, field hockey any different. But again, if I watch any TV station’s news, I will routinely hear Taoiseach or Tánaiste or Gardaí mispronounced and nothing is ever said about it.”

“Irish people are conditioned to watching the RTÉ model. Ours will be different. I just hope that people come to it with an open mind. I’d love people to walk away each week saying they learned something new.

“RTÉ’s analysis is really good but the tools we’re using allow us to do things in real time that probably up to now could only have been done with more reflection. I think it will be a case of breaking the game down more minutely.

“But the one thing I’ve always said is that I don’t want anyone to walk away and say that we’ve done something wrong with the product. Because to me, it’s the best product in the world.

“Even if you took away all the stuff around it, the game is still the most fascinating thing in any broadcast.”

England need 36 to win as bad light halts play in Sri Lanka 13:04
Bríd Stack hospitalised after injury in AFLW pre-season friendly 11:28
India rearguard frustrates Australia and leaves series in the balance 11:19
Brendan Steele takes the lead at Sony Open with a round of 61 11:10
Man United head to Anfield as top dogs but Liverpool know how to respond 11:03