GAA’s disciplinary system a lot better than it once was 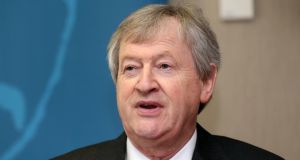 It used to be a great staple of GAA Congress debates on broadcasting policy to give out that RTÉ were failing to promote the championship coverage the way Sky Sports did with English soccer. Few of the complainants dwelled on the massive differences between the respective products.

In one, the lowliest of teams had a guaranteed 38 matches; in the other the defending champions, in those pre-qualifier days, could be out on their ear after the first two weeks of the season.

Sky Sports may again wistfully have crossed the minds of Croke Park administrators at the weekend. Unlike the GAA, when Premier League soccer threw up a “biting” controversy it was able to do so in a fully televised context with the offence framed in juicy camera shot.

For the best part of the past three weeks the GAA has been dealing with allegations of biting against Dublin footballer Kevin O’Brien with no such clarity as to whether or not he was responsible.

The Central Competitions Control Committee has established on the basis of its investigations that there is a case to answer. The player vehemently denies this and is fighting the proposed three-match suspension – opting instead to avail of a hearing, which is where the matter rests until it shortly comes before the Central Hearings Committee.

The air of drawn-out intrigue that attends the whole business is largely brought about by the protocols of the GAA, which sometimes appear to specialise in meaningless secrecy.

There is strictly speaking some purpose in trying to keep the proposed suspension under wraps as the CHC members are supposed to be hearing the whole matter ab initio and therefore the recommendation of the CCCC has no further purpose once it’s rejected.

Whether prior knowledge of what was proposed would have an influence on a committee of experienced administrators chaired by a solicitor is open to question but the requirement is taken seriously enough to be deemed in one case to have prejudiced a CHC decision some years ago after the recommended CCCC suspension got mentioned at a hearing.

The idea that revealing the identity of the player might prejudice his case is more peculiar as if he’s in attendance his name will be obvious to the committee.

Anyway it’s all a far cry from the clean certainties of a soccer player performing his delinquency in public and the hasty acknowledgement and apologies that swiftly followed even before the hearing, which was set up within a couple of days.

Are the GAA’s structures to blame for the inordinate amount of time that it takes to process something like this? To be strictly fair, that’s not comparing like with like. The process in this case is more similar to that undertaken by the FA in respect of a previous controversy involving Luis Suarez: the racial abuse of Manchester United player Patrice Evra.

That involved one word against another and an investigation, which proved so long-running that there were more than two months separating the incident, which had triggered the complaint, and Suarez’s suspension for eight matches. In that context, getting a hearing up and running within three weeks doesn’t look so tardy.

Even rugby’s fast-moving system of citing operates almost entirely on the basis of video evidence, to which aggrieved parties can draw the attention of the Television Match Official, rather than investigation.

But does the system work? In his last annual report before retiring, six years ago, Páraic Duffy’s predecessor as director general, Liam Mulvihill, said the following about the administration of discipline.

“We should take discipline at intercounty level out of the hands of the present administrators entirely and bring in a three-person legal commission to deal with all offences on the field of play.

“I would retain the DRA to hear appeals against decisions of the commission and in this way the whole system would be administered more quickly and in a more balanced, even-handed fashion. If we could clean up the games at central level and have justice and fair play administered in a consistent, timely and even-handed manner at that level, we could then tackle the situation at other levels.”

There are advantages to such a system that don’t necessarily reflect badly on the structures in place. One source of unavoidable delay at present is the fact committees are dealing with amateur players and amateur administrators, who have jobs they can’t leave at the drop of a hat. Business is accordingly restricted to when everyone can find the time.

There are two arguments against this. Firstly a more streamlined structure leads to a more summary jurisdiction: suspension and one shot at appeal. The rules provide for an exceptionally fair process for players: citing, hearing, appeal and arbitration – four levels or three avenues of challenge. Secondly in the six years since Mulvihill’s remarks the system hasn’t functioned badly. After an initially rocky phase when several parties had a crack at the Disputes Resolution Authority, the flow of cases has all but dried up.

At present lawyers Garrett O’Reilly and Liam Keane head up the CHC and Central Appeals Committee respectively so you’d need to be a professor of loopholes to steer much in the way of plausible objection in the direction of the DRA. The GAA’s disciplinary function is by no means perfect – but it’s a lot better than it was.