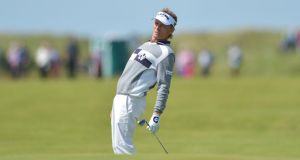 The only thing former Ryder Cup captain Bernhard Langer and Soiled and Ancient skipper Vinny Fitzpatrick had in common on the golf course was their year of birth, 1957. Photograph: Mark Runnacles/Getty Images

Vinny Fitzpatrick was, as he freely admitted, a wojious golfer, a short, jabby, hitter, with a whip-like hook which appeared like a devil on his left shoulder – always the left – with dreadful consequences.

His bunker play was so slapdash whenever his ball plopped into sand, Vinny fished it out with a snort and moved on, while his play on the greens, especially over short putts, was at times painful.

But Vinny loved the noble game with a passion matched only by his unquenchable thirst for creamy pints.

And when asked by Old Man Foley to be non-playing captain of the Soiled And Ancient’s golf society team for the bi-annual match with the Foxfield Foozlers for the Mulligan Medal, Vinny felt he’d died and gone to heaven.

Mainstay Vinny’s Soiled And Ancient’s record was almost as wretched as dear old Alf Padgham in the Ryder Cup – played seven, lost seven – apart from 1998 when he famously secured a Mulligan-winning half in St Anne’s after his opponent broke an ankle jumping for joy upon holing a long putt.

The 2014 edition of the Mulligan Medal was to be played over two days, and one night, at Roganstown in midsummer.

Deepest Fingal
It was less than a dozen miles to deepest Fingal from Clontarf but it might as well have been a five-day camel ride into the Sahara such was the buzz among the lads – even in mid-February.

As non-playing captain – strictly non-playing warned, Old Man Foley – Vinny got to pick two wild cards for the eight-strong team, and to arrange the pairings for the fourballs on day one and scotch foursomes on day two.

There were four outings to be played before the team was selected and Vinny was determined to follow the lead of fellow Dub Paul McGinley and be hands-on at the tiller.

It explained Vinny’s presence on a towering sand dune at the seaside links of Laytown and Bettystown on a crisp, but thankfully dry, Tuesday morning.

He had considered playing, having got two shots back on huis handicap, to 26, but felt his game was still rusty from the winter hibernation and it was s best not to put his partners in the spotlight. ‘They might crack under the pressure,’ he thought.

Instead, he took to prowling the links, trying to be invisible, not easy for a man of his immense girth wearing a canary yellow gansey.

The forenoon was pitch-perfect and it finally felt as if winter’s icy grip had been loosened.The Irish Sea was as calm as a mill pond and Vinny could see north past Clogher Head towards the Cooleys, and south to Red Island in Skerries and Lambay.

As a nipper, he had been brought to Laytown every summer by his old man, Finbarr, for the race meeting on the beach. From memory, the sun always shone, his old man cursed every bet he struck, but always kept a tanner in reserve so he could buy Vinny an ice-cream for the train home.

His old man was full of stories about Laytown, like the one about St Patrick blessing his first convert to Christianity in the water of the River Nanny, where it met the Irish Sea.

There was also a rumour that the little watercourse was free of salmon because St Patrick banished them all.

Vinny didn’t believe a word of it but he recalled stopping for a bit with his old man to watch the locals fishing the Nanny, and no one ever landed a salmon.

In recent years, Vinny enjoyed the odd excursion to Laytown with the lads, more for the craic than serious punting as rarely did a decent horse run at the meeting.

He hoped the meeting fixed for September would go ahead despite the legacy of the recent storms which had blown away sections of the dunes.

Destruction
Vinny ambled over the practice range for a gander at the damage. To his naked eye, the destruction was clear but he was sure, within six months, the good folk on the Laytown Races committee would have everything ship shape.

By now, Vinny had lost his bearings slightly. He knew he was somewhere to the right of the third hole, but out of sight from the tee.

Suddenly, a ball whistled past his ear-hole, bounced forward and rolled past white stakes into the practice range, which was out of bounds.

Vinny felt he was in the firing line and nestled down into the lea of a sandbank, safe from any more errant shots.

As he settled into his eyrie, he spied the head of Dial-A-Smile, approaching from his left. He was about to commiserate with the sullen bar man from Foleys that his ball was out of bounds, when he heard him shout out to his playing partners. “It’s okay, I have it”.

Squatting down in the marram grass like a gigantic buttercup, Vinny looked on, gobsmacked, as Dial-A-Smile scuttled into the practice area, which was empty, scooped up his ball, and placed it snugly on a mound of close-cropped turf.

“Watch this for us, lads,” he called out, before smashing his ball, which had been teed up perfectly for a brassie lie, in the direction of the green.

Vinny was stunned, for he had just witnessed a crime against sportsmanship, if not humanity itself.

As Dial-A-Smile disappeared over the brow of a ridge, trolley rattling behind him, Vinny felt a mix of dismay and rage. “What a double-dealing louser,” he thought

It was all too much for Vinny to grapple with so he made for the clubhouse, where he ordered the full Irish breakfast, with tea, toast and chips for a tenner.

He was enraged, particularly as he knew it would be his word against Dial-A-Smile’s, for there were no witnesses to the vile deed.

Despite the nosebag, his mood was still vile five hours later when Dial-A-Smile was declared the winner with 37 points off an 18-handicap.

“What a start to the year for me,” said the smarmy barman in his acceptance speech. “This was one of my goals; another is to make the team for the Mulligan Medal.

“You know,’ he continued, looking at Vinny, ‘You can always count on me, skip.” “Skip” gritted his teeth and said nothing.