Dave Hannigan’s America at Large: Knicks are so dysfunctional even fans hoping they keep losing 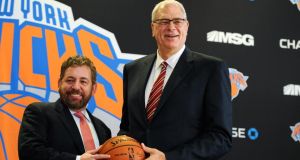 Shortly before the NBA season began, Phil Jackson announced that the New York Knicks had begun “mindfulness” training to make them better understand and appreciate being and breathing in the moment. Nobody was too surprised that a few months into his role as president of basketball operations, a man known as ‘Zen Master’ was preaching the need to always find inner calm amid turmoil. When his team subsequently lost 20 out of their first 24 games, however, no amount of Buddhist meditation techniques were likely to be enough to keep the peace.

During a recent defeat by local rivals, the Brooklyn Nets, the Knicks’ star turn Carmelo Anthony threatened to beat up team-mate Tim Hardaway Jnr. Signed to a five-year $124m contract extension last summer, the notoriously selfish Anthony took umbrage when his younger colleague had the temerity to shout “get the rebound” in his direction. On the way back down the court, he cursed Hardaway out and told him he’d pay for it in the locker-room later. They never did come to blows but their feud is apparently only one of many simmering conflicts in a club riven by dissent.

The players seem reluctant to defend when they don’t have possession and are reportedly unhappy at being made to work out the day after games. Rookie coach Derek Fisher looks like a man learning on the job, constantly chopping and changing line-ups. Both Fisher and the team appear baffled by Jackson’s diktat that they must play the triangle offense, a tactical approach that served him well when he led the Chicago Bulls and the Los Angeles Lakers to 11 titles. Of course, those storied tactics were that bit more effective when being deployed around one-off talents like Michael Jordan and Kobe Bryant.

Before becoming the NBA coach with the highest winning percentage, Jackson played on the last New York team to win a title back in 1973, and his return to Madison Square Garden was supposed to be a triumphant homecoming. Lured out of retirement following a meeting with the Knicks’ owner James Dolan at a Hollywood party last Christmas, and an ensuing offer of $12 million (€9.7million) a season, he told his opening press conference back in March, “This is the best place to play basketball.” The problem is that statement hasn’t really held true for a long, long time.

Aside from failing to contend, and going through nine different coaches in that time, the club has also become synonymous with dysfunction, an unfortunate tendency many reckon coincided with Dolan’s ascension to the top job.

Even by the gaudy standards of American sports ownership, Dolan cuts an especially cartoonish Richie Rich figure. A wannabe rock star who helicopters session musicians to his Long Island mansion for rehearsals, his blues band JD and the Straight Shot released a rather crass single earlier this year called Under That Hood, dealing with the controversial shooting death of hoodie-wearing Florida teenager Trayvon Martin. When it comes to the Knicks, the 59-year-old alternates between micro-managing (picking the cheerleaders’ outfits) and just plain tomfoolery (trying to impress free agents from other teams by handing them CDs of his music).

When a team employee brought a $5m sexual harassment case against then coach Isiah Thomas back in 2007, Dolan refused to settle out of court and ended up paying $11.5m. That this mistake might struggle to make the Knicks’ top 10 most expensive errors of the past decade sums up their profligacy.

In a league with a strict salary cap where one bad personnel move can cripple a club for years, Dolan has repeatedly overpaid players and coaches, and too often ended up having to buy them out of lengthy contracts to stop the bleeding. After just one disastrous season in charge, Larry Brown was given $18m to walk away back in 2006. That the current side vies with the Philadelphia 76ers for the title of worst team while boasting two of the top five earners in Anthony and the injury-prone Amare Stoudemire shows that little has changed in the meantime.

Indeed, things have reached such a sorry pass that some Knicks’ fans are now hoping the team keeps losing in order to better improve the chances of snagging a young superstar like Duke University centre Jahil Okafor in next summer’s draft. The problem with that approach is it requires a modicum of patience and a lot of long-term planning, and, even before Jackson came back to town trailing mantras about mindfulness, the Knicks, Dolan and New York have always been all about living in the moment.

1 Ferrari’s Charles Leclerc ‘will not take the knee’ before Austria GP
2 Monica Seles: The warrior queen who could have been the best ever
3 Serpentine stays on from the front to steal Epsom Derby for Aidan O’Brien
4 Séamus Power huffs and puffs as Wolff blows the door down in Detroit
5 Eamon O’Shea: We spent quite a bit of time talking about older people rather than to them
Real news has value SUBSCRIBE
Here is your handy guide to sport on television this week