Coronavirus: Sport comes to a standstill in Ireland

GAA, FAI and IRFU suspend sporting activity until the end of the month at the earliest

From 6pm, schools, colleges and other public facilities will close in the Republic for at least two weeks in response to the spread of coronavirus. 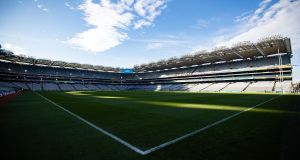 There will be no GAA matches or training in Ireland until Match 29th. Photograph: Inpho

The three main sporting bodies in the country, the GAA, FAI and IRFU, responded by imposing blanket bans on sporting activity at all levels under their jurisdictions until the end of the month.

The GAA’s ban includes all games, training and team gatherings at all ages and all grades. In a statement released on Thursday afternoon the association explained they “will continue to liaise with government officials and review the situation between now and the end of the month, assessing the impact of these measures on our competitions. In the meantime, the association is encouraging all members to continue to follow the guidelines which have been provided by the health authorities.”

After a meeting with officials from the Department of Health on Thursday afternoon the FAI has followed the lead of other major sports organisations and suspended all football activity under its jurisdiction with immediate effect. Games will not start up again until at least March 30th.

Games are to be cancelled with immediate effect at all levels and many underage leagues and other affiliates had already informed clubs that all activities this weekend are off.

The move will cause concern among the senior game’s professional clubs and players, who only began to consider in a serious way on Wednesday how the financial implications of a suspension of the League of Ireland might be dealt with.

The hope is to secure funding from Uefa and government to help club pay players then play the postponed games later in the year when, it is hoped, coronavirus has completely passed.

The association has also cancelled the squad announcement by Mick McCarthy in Dublin which had been scheduled for lunchtime on Friday.

It had been intended that the Ireland manager would name his squad for the forthcoming Euro2020 playoff game in Slovakia but the match itself is very much in doubt now after the FA there, the SFZ, asked Uefa for a postponement and the European federation said that it would deal with a range of issues during a video conference to include all member associations as well representatives of clubs, leagues and players next Tuesday.

In France, L’Equipe has suggested that Uefa will announce the postponement of the Euro 2020 tournament for a year in order to facilitate the completion of the organisation’s lucrative club competitions in the early part of the summer.  That would have major implications for the FAI whose next senior team manager is due to take over the job on August 1st.

The IRFU said that they were shutting down rugby in the country in response to the "latest Government advice on the Coronavirus (COVID-19) pandemic.”

The Pro14 season has also been suspended, with organisers explaining in a statement that as “an international league, cross border travel is inevitable and that brings with it unique challenges. With governments in Italy and Ireland already putting in place clear directives and restrictions around public activities and travel, the decision to suspend the competition is appropriate.

“It is in the best interests of everyone that games are not played at this time. The suspension has been directed by the board of Celtic Rugby DAC and will be remain under constant review.” Resumption of the 2019/20 season will now become a matter of constant review.

Dundalk’s fixture on Friday evening will be the first Irish race meeting run behind closed doors as Horse Racing Ireland announced all fixtures will be closed to the public until March 29th. The board of the sport’s ruling body made the move on the back of government advice issued on Thursday morning to try and contain the spread of coronavirus.

Rowing Ireland has asked clubs to make decisions on a case by case basis in regard to restricting activities. They warn about the dangers of gyms for breeding germs and recommend that those training outdoors should not shower at the club; they should also be extremely careful in keeping equipment clean.

Sporting Shutdown - at a glance

All gatherings of more than 500 people in Ireland cancelled until March 29th.

GAA, LGFA and Camogie association confirm blanket bans on all activity at every age level.

FAI announces cessation of all football under its jurisdiction.

France v Ireland and Italy v England games in the final round of the Six Nations postponed.

St Patrick’s Day race meeting Down Royal will be run behind closed doors.

Spain has postponed all LaLiga matches for two weeks.

All sports events in Italy, including Serie A soccer, have been cancelled until April 3rd.