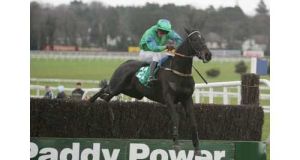 John Cullen pops Black Apalachi over the final fence on their way to winning the Paddy Power Chase at Leopardstown yesterday, watched by a record modern-day crowd.

Racing: The 25 to 1 outsider Black Apalachi proved to be a sponsors dream when grinding out a thrilling victory in yesterday's Paddy Power Chase at Leopardstown.

As if the winner wasn't enough of a skinner in the €190,000 handicap holiday highlight, the one-length runner-up, Camden Tanner, was 20 to 1 leaving only Ross River in third to provide backers of the market leaders with any kind of consolation.

All of which mattered little to the ecstatic 27-year-old winning trainer Philip Rothwell and jockey John Cullen who saw his Christmas sacrifices pay off in some style.

Cullen put up only 1lb overweight to do 10st 5lb, a fine effort that the rider characteristically dismissed with: "It wasn't a real waste. I just had to watch it over the Christmas."

If we can take it then that Christmas dinner was light, then last night's meal must have tasted good indeed for Cullen had to work hard on his mount who raced prominently throughout and betrayed no inexperience on what was only his fourth start over fences.

At the second last Black Apalachi had a mob of horses waiting to pounce and none was going better than the JP McManus runner, Lost Time.

However, his run petered out and with the favourite Jaquouille fading to finish only 18th, it was left to Camden Tanner to provide Cullen with his greatest headache. Black Apalachi proved well up to the task, though, and held on to provide his young trainer with the biggest win of his career.

"I'm speechless," said the normally loquacious Co Wicklow trainer who quickly recovered his voice. "We will stay in handicaps and look at the Thyestes and the Irish National."

Rothwell trains 45 horses near Tinahely and he praised the role Cullen has played in supporting him. "John wasted very hard and even with 1lb overweight I was delighted to have him. He gets on so well with the horse and he has stuck by us," he added.

Afterwards the stewards inquired into the improvement in form of the runner-up and noted the explanation of trainer Robert Tyner.

If the big race was a bookies benefit then the champion trainer Noel Meade was the punters favourite with a sparkling three-timer that included a possible future champion.

Sweet Wake was a Group Two winner in his native Germany and was bought for 150,000 guineas at Newmarket earlier in the year. But the price looks a bargain now after a sparkling debut in the maiden hurdle that saw him installed as low as 12 to 1 for the Supreme Novices' Hurdle at Cheltenham.

"He has never been off the bridle at home and he jumps like a rocket," reported Meade after a smooth four-length defeat of Royaldou. "I thought before the race he'd win and now I'm just feeling relief. He could be the real goods."

Sweet Wake will now go for a winners' race while his stable companion Iktitaf might go to England for the Tolworth Hurdle at Sandown.

The Grade Two race with the actual future champions label went to another Meade runner in Mr Nosie who overhauled the pace-setter Blueberry Boy in the closing stages and earn his own Cheltenham quote of 16 to 1 for the SunAlliance Hurdle.

"He's so lazy it's hard to know with him but if he is a Cheltenham horse it will be the SunAlliance rather than the Supreme," said Meade.

The treble was brought up by the point-to-point winner Snow Term who turned the bumper into a procession and is likely to be seen over fences sooner rather than later.

"The plan is to go straight to hurdling and then go over fences next season. He is from the family of Marlborough. I don't think we will be tempted by the bumper," said the trainer.

Le Coudray turned the clock back and provided the champion owner JP McManus with his first Leopardstown winner of the week in the three-mile handicap hurdle.

The injury-prone 11-year-old is a former Stayers' Hurdle runner-up and trainer Christy Roche said: "He's a magnificent horse but he hasn't a leg to stand on. We can't gallop him and he's like Mark Spitz. He swims three times a day!"

Tony McCoy was a late booking for the favourite Vox Populi in the 3-y-o hurdle and the partnership won easily from the Meade-trained runner-up Restoration. "He could be a horse for the Triumph," said trainer Steve Mahon but Cashman rate the horses chance in that at 50 to 1.